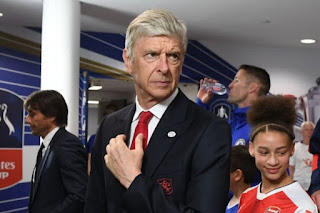 Arsenal majority owner, Stan Kroenke, has insisted the club was right not to give into pressure and sack manager Arsene Wenger after last season.

A disappointing 2016/2017 campaign saw the Gunners fail to qualify for the Champions League for the first time in two decades, although the club clinched the FA Cup.

Frustrations were high during the season among supporters, with banners being flown during game days calling for Wenger’s sacking.

At the end, Kroenke decided to give Wenger a two-year contract extension.

“Arsene is strong, he’s focused and I think he showed through all that,” Kroenke told the Daily Mirror ahead of the club’s Annual General Meeting.

“We always evaluate, and it’s fair to look at all the factors involved. But when you make decisions like that, you are weighing lots of different factors, but you hope that you weigh them correctly and come out with the right decision. I think we did.

“It’s easy to change coaches and people do it all the time. But the hardest thing is to replicate success and remain competitive,” Kroenke said.

“You have to approach it with clear-headedness, calmness, thinking for the long term rather than the short-term. An easy answer is it’s easy to do something. It’s harder not to do something.”