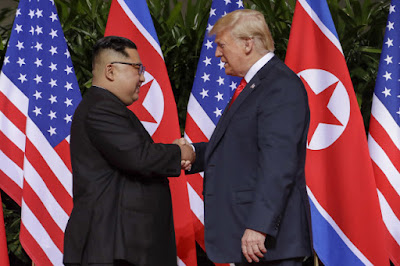 History was made as the North Korean leader Kim Jong Un and President Donald Trump meet-face-to-face at the summit in Singapore.


It's the first ever meeting between a sitting U.S. president and North Korean Leader.

Donald Trump said he expected to have a "terrific relationship" with Kim Jong-un after the two leaders shook hands ahead of a historic summit in Singapore on Tuesday.

In the first ever meeting between sitting leaders from both countries, the pair greeted each other warmly at a luxury hotel on Sentosa Island, before heading in for one-to-one talks about denuclearisation.

The US president and North Korean leader approached each other while walking along outdoor corridors lined with white colonnades, with Mr Trump coming from the right and Mr Kim from the left.

Mr Trump, who is 6 foot 3 inches, towered over Kim, who is around 5 foot 7 inches and close to 40 years younger than the US president.

Mr Trump then directed Mr Kim to walk down a hallway, where they briefly spoke.

"Nice to meet you Mister President," Mr Kim said as he sat alongside Mr Trump, beaming broadly as the US president gave him a thumbs up.

With cameras of the world's press trained on them, the two leaders built an initial atmosphere of friendship.

"I feel really great. We’re going to have a great discussion and will be tremendously successful. It's my honour and we will have a terrific relationship, I have no doubt," Mr Trump said.

"It was not easy to get here....There were obstacles but we overcame them to be here," Mr Kim replied.

After about 40 minutes of talks, the leaders emerged, with Mr Trump predicting  they will solve the "big problem" on the Korean peninsula.

What is Conversion Tracking? How to S…
General knowledge Question For SSC C…
Highlands, Buttermilk Opening and Sum…
$50 Million Stolen from Upbit
How to Create a Winning Black Friday …