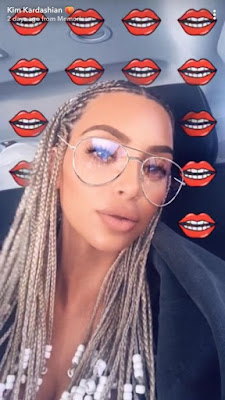 Kardashian posted a photo to social media on Monday, January 29, of her new hair with the caption “BO WEST,” seemingly inspired by Bo Derek. The KKW Beauty creator is facing backlash and being accused of cultural appropriation from fans for her cornrows. Amid the controversy, Lohan took to Hilton’s Instagram to write “I am confused” when the blogger asked followers for their thoughts on Kardashian’s new ‘do.

@KimKardashian just responded to @LindsayLohan's comment on my photo of her new hair and I AM CRYING and squealing and gagging!!!!!!!! It feels like 2007 again!! Tag your favorite Kardashian lover AND hater! PerezHilton.com/KimKardashian
A post shared by Perez Hilton (@theperezhilton) on Jan 29, 2018 at 1:38pm PST

Kardashian West is referring to the puzzling European accent Lohan adopted in late 2016 after a year of traveling.

“It’s a mixture of most of the languages I can understand or am trying to learn,” she told the Daily Mail at the time. “I’ve been learning different languages since I was a child. I’m fluent in English and French can understand Russian and am learning Turkish, Italian and Arabic.”

However, during a recent appearance on The Wendy Williams Show, Lohan’s accent was noticeably missing. She does, however, have big plans to move abroad.

“I’m discussing designing an island in Dubai,” the 31-year-old star told Williams. “I have a lot of little projects there because I like to keep busy. So, when I’m finished filming [British sitcom] Sick Note I can go back to Dubai, start the lipstick, discuss that and then design this island" - Lohan Island.