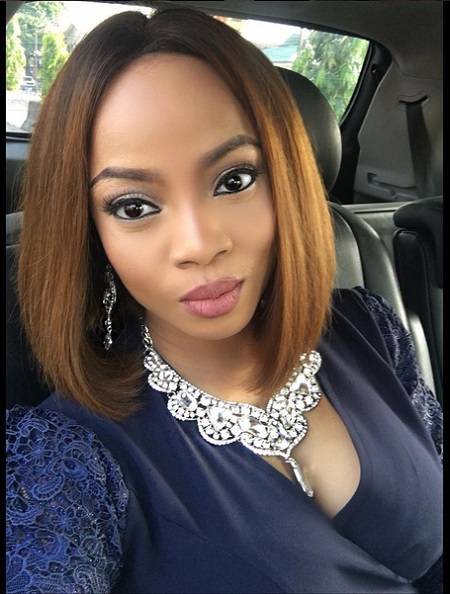 Celebrity media personality, Toke Makinwa, has been accused of being in a romantic relationship with billionaire oil mogul, a relationship that has been trailed by misery and bitter reaction by the business man’s children.

Multi-award winning Nigerian radio OAP, and vlogger, Toke Makinwa, who co-hosts “The Morning Drive” on Rhythm 93.7 FM in Lagos, has been allegedly warned by the children of billionaire businessman, Festus Fadeyi, to stay away from their father, the Managing Director and Chairman at Pan Ocean Oil Corporation (Nigeria) Ltd.

Some sources had started the rumour of their relationship in October after claiming that the oil tycoon was the one funding Toke’s luxurious lifestyle which reflects a show off of incredulously expensive bags and outfits, and first class flights abroad.

According to an exclusive report by The Capital, Fadeyi’s children are “desperately seeking her exit from their father’s life” especially since their father recently completed a new mansion in Ikoyi and they fear Toke may be moving in with him.

Also, the children worry about how much their father spends on Toke, not minding his multi-billion naira loan with Skye Bank which has almost sunk his business. For this reason, they have declared war on the OAP.

Here’s how The Capital exclusively broke the story;

Even the most formidable nobility in the world transforms into a lady’s fool, when caught in the pleasure trove of love. You can tell what effect billionaire, Festus Fadeyi’s romance with OAP, Toke Makinwa, has on his family by his children’s unfathomable misery and bitter reaction to their relationship. Toke arouses despise from Fadeyi’s children.

That is why they desperately seek her exit from their father’s life. Like angry runts seeking to fall a veteran gladiator, Fadeyi’s children tirelessly engage in never-ending plots to extricate their dear father from the perceived web of Toke’s allure.

At first, their fears were deemed unfounded by family friends, close and distant relatives, but ever since their father completed his sprawling mansion in Ikoyi, the children have become very worried about the possibility of seeing Toke hop in the master bedroom with their father. Fadeyi’s children are very angry with the way he splurges on his love interest, Toke. They believe he is squandering too much money on her at a time he is heavily indebted to Skye Bank.

Recall that the well-heeled founder and CEO of Pan Ocean Corporation, an indigenous independent oil firm, acquired a multi-billion naira loan from Skye Bank. His indebtedness to the bank is estimated at N196 billion few months ago.

Notwithstanding, Fadeyi spends extravagantly on Toke. For instance, he allegedly bought her a brand new Range Rover 2016 model worth over N50 million. He is also responsible for her acquisition of top of the line and very expensive designer bags, shoes and apparels. From Louboutin, Bottega, Chanel, Louis Vuitton to Hermes among others, Fadeyi spoils Toke silly with the most pricey ware.

Thus the world’s most expensive designer brands are mere names on Toke’s list. The popular social media big girl considers Selfridges and Harrods as ordinary shopping points at the moment,. Whenever she visits London, United Kingdom (UK) via business class or first class flights paid for by Fadeyi, she spares no expenses at the city’s posh shopping points.

It is very interesting to note that Fadeyi foots such outrageous bills for Toke while he wallows in loan debt to his bank. What Fadeyi’s children find alarming however, is Toke’s continual neglect of her lover’s precarious financial situation.

Consequently, they have declared war against her, warning her to leave their father alone. Frightened by the undisguised animosity, Toke has resorted to extreme measures to avoid their wrath or unpalatable encounters with them. For instance, she now tries to steal around town incognito by covering her vehicle’s number plate with leather.