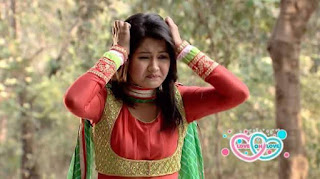 Everyone congratulates. The host says that they have seen no company successing at a rate Khandlwal industries did. Suket says his dad kept its base, he followed his principles. Raj says that Akshit now follows Suket. He once rejected a project. Akshit explains that the land belonged to some orphans and Suket has always taught him to follow all the principles in life. they head for the ceremony.Akshit goes to touch Bhawna’s feet. She holds her hand back, but Avni holds it and places it on his head. As he stands up, he wishes him and gives his hand in Bhawna’s. Akshit smiles and goes to his seat.Suket holds his hand to remove the fold from Akshit’s coat. Arpita comes and sits on her chair in between them; he poses to be taking the glass of water. The host calls him to give away the award. He announces that the award goes to Akshit Su… Akshit! Akshit goes up. Suket gives him a card along with the award; he had cut Suket from his name on the card. Akshit is heart-broken.

Avni brings the bouquet and tells him to see something. Dad his work, now its your turn. Akshit comes to the dice and says he wants to thanks his dad for the award, he became so emotional but want to say that he want to praise him because of himself so he removed Suket from my name. But I am Akshit Suket Khandelwal. He says that whatever he got in life is because of him, he is his teacher, his mentor, his everything. He says that today I reject this award to take this award from my name and I want to receive this award not as Akshit but as Son of Mr. Suket.Everyone praises him, Suket smiles looking at him. Someone says that everyone should have such a son, Suket leaves. Avni thinks everything went well, she is sure dad must also be happy. She thinks it is the good time to give him the thanks giving gift.She finds him and says that your watch isn’t good, you must change it. He says everyone likes his watch, and it is his lucky charm. He goes to sit on the table everyone was sitting on.Avni comes there and in a quest to hold the glass she pours water on Raj’s wrist watch. She excuses him; he says no worries as my watch are water-proof. He goes to attend a call. She holds his hand, and takes mobile from him. She tells him to take this watch away, he gives her his arm. She gives him the gift and says we both like this watch so now you will wear it. She says you teased my a lot. He holds her hand and kisses it. She runs away.Everyone appreciates Akshit’s speech. Pratab appreciates Akshit’s watch. Raj comes and says that he also got a watch from someone, which is priceless from him and gives him clues about nearness of his goal.Raj goes to distribute some vouchers among the guests. Some people stood there, one of them asks who this guy is running around Suket. Another says this is the brother-in-law of Sheru caterers and must be with Suket on some special recommendations. He does nothing except wandering around. Avni comes to them and tells them that guy they are talking about is the son of a huge cement company owner and runs the biggest company for catering in town and is personal assistant to Suket. He is talented and hardworking so no one dare talk about him like that.

They apologize, Raj comes to Avni says that if she favours him like this people will think she loves him. She says let them think if it is like that is reality and runs away.In the morning, Sanvri is making preparations. Pratab asks what is she doing. She says she is preparing for the new guest. Pratab tells her that she must stop hoping for anything until they get a call for interview. Sanvri excitedly tells him that she has even chosen a kid.The owner tells Jija and Jiji that he will discuss with the committee before coming to any decision about them.Bauji takes a leave from Avni to be leaving for some prayers. He tells Akhsit to keep his award with those of Suket’s, and instructs Avni to look after it that it isn’t removed from there. Bauji leaves. Arpita brings the award, Akshit is urged by Avni to place the award there. Suket comes and stops him. Avni prays that everything went well.

Suket comes to him and says that yesterday he did so bad to him, he took his sir name from him. He feels bad that Akshit still didn’t take him wrong. He says he can keep his award here with his and that he also has a gift for him. He asks for Akshit’s hand, as he brings it forward Suket places keys in it and announces that it is your new home. Now you will live away from here in a new house.Everyone is shocked to hear Suket telling Akshit to live separately. Akshit argues, Suket says this is your reward. Suket says that yesterday you talked about me, my anger, my forgiveness; you selected this platform to ask for me for an excuse in front of everyone, and you thought I will forgive you for what you did to me. And you said you learned everything in life from me; when did I teach you to tell a lie, it still pains me. Until you remain in front of my eyes neither I nor you will remain in peace. He tells him that he fulfilled his responsibility as a dad by giving him this house, now as a son he must leave this house in peace.

Suket begins to leave, Akshit runs to stop his way and tells him to give him whatever punishment he wants to give him but not set him apart of them. Suket says you lie that you love us, you only love your wife for whom you lied to us, and so you should just leave this house. Suket goes upstairs, Pratab says this is all wrong, and goes upstairs. Akshit is upset, Arpita tells him that dad is angry so he said this all, he will forget this all in a while; don’t worry; we won’t have to leave this house.

Akshit says that we will go, if he wants so we will go from here for sure. If this is our punishment, he accepts this. He tells her to go packing, and looks at the family photograph of his family. He recalls his parents appreciating him at every step f life. Arpita cries as she sees Akshit broken.Avni begs Suket in his room, to think again about his decision. He says firmly that he took the decision thoughtfully and the decision is right. Pratab says that if something is injured, it is treated not thrown away. Pratab says that the decisions taken hot headed are always wrong. Suket says that he didn’t take the decision over night, he was just waiting for the papers of the new house.

He says that none of them has an idea what he himself is going through, it is very painful seeing them after what they did to them. Bhawna cries hard, Suket says that his decision is hurting her a lot but their deed hurt them more than this that is why she is with him today. Pratab says that this will increase his pain even more, and one day he will regret this. Avni begins to speak but Suket scolds her to go to her room.After Suket goes away Sanvri asks Bhawna did she know about Suket’s decision, why didn’t she stop him. how can she let Akshit go, if one should go away it is Arpita. Arpita listens to this.Akshit packs the luggage, Arpita goes away crying as he looks at her. Akshit takes the luggage. Downstairs Sanvri urges them to stop Akshit and don’t let him go. Arpita comes to Avni and tells her that her family will remain the same. Akshit comes downstairs; he comes to Suket and begins to touch his feet. Arpita stops him and says that he doesn’t need take these blessings as he isn’t going anywhere.

Akshit argues that they decided that they will abide by dad’s decision. Arpita says that we shouldn’t look down upon Sanvri Bua ji’s decision; she is right when she says I should go as I am responsible for all the problems in the family. She says as we decided, we should not stay together now and I should go away from this house. Akshit recalls what she said to her in the bedroom.

Arpita now speaks to all; she says that someone has been right that lies never see the right fate. She says it was me for whom Akshit took such a step, family is always larger that love. She can’t take from Akshit his family. She tried that she can compensate for her mistake but her fate couldn’t get her their love. The happiness that left their home after her arrival will return when she will go back. She touches Suket’s feet but he backs up.

Bhawna also doesn’t keep hand on her head. She comes to Sanvri but she looks away, she still touches her feet. She comes to Pratab, he stops her from bending. Avni asks Bhawna to stop Arpita; she comes to Akshit and asks him to stop her. Avni stops Arpita, but she doesn’t. Bhawna calls to stop Arpita. Everyone looks at her; Bhawna comes to her and says you won’t leave alone.

Arpita says that it is all her fault, she must leave. Bhawna says that you didn’t come to this home alone, Akshit brought you here. Akshit also did the wrong, why should you take the blame all alone. Arpita asks Akshit who will he chose if he has to from his family and her. he doesn’t say anything. Arpita says that if Akshit lives without his family they wont be able to stay happy ever. Sanvri comes and urges Bhawna to let Arpita leave this house if she is willing to go and accepts her fault. Bhawna says that when she came into the family we all opted her, then why shouldn’t we all share the blame of their fault.