Accordind to Justin M. Bienio, Increasing your following organically is a long, arduous process. It’s not necessarily “challenging”, but you have to work for it. There is no magic bullet to gaining followers other than having an influencer tell their following to follow your account. That’s like winning the Instagram lottery. It’s not a viable solution for success. 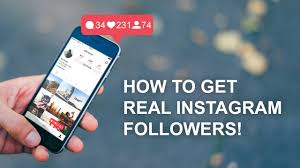 So what should you do instead of “buying followers”?
1. Set Up Your Account Properly
2. Content Creation
3. Captions
4. Hashtags
You can use up to 30 hashtags, just do so wisely with a good mix of the above. Using a bunch of #love or #travel that have like 100M uses will get your photos lost on those explore pages almost instantly. Conversely, using too many highly specific will leave you pitching to too small of an audience.
5. Identify & Follow GOOD Accounts
They’re likely to be trying to build their following
As accounts get more followers, they’re less likely to follow back (i.e. The Rock)
-- If they go several days or weeks without posting, don’t bother
-- If they haven’t posted in the past month, don’t bother
-- Follow a reasonable number of accounts
This varies by size - smaller accounts just starting out will likely be following more accounts than they have followers
For larger accounts, look for ones that follow about 25-50% of their follower count
For smaller accounts, look for ones that follow about 50-200% of their follower count
For very small accounts, look for ones that simply don’t look absurd (i.e. 50 followers and follow 2,000 accounts)
Example 1: Accounts that have 3,000 followers and follow 3,000+ accounts aren’t necessarily highly engaged accounts -- they are likely just the follow-for-follow type of account
Example 2: Accounts that have 1,000 followers and follow 200 accounts are unlikely to follow back because they’re either elitist (want to keep their number very low to look desirable) or simply want to keep their feed uncluttered and are very picky with who they choose to follow
Example 3: Accounts that have 200 followers and follow 450 accounts are likely trying to build their following and are good accounts to target
6. Engage with their followers
Look at the comment section on a few accounts and see if they respond to comments
No responses = not an engaged account and are unlikely to engage with you
Consistent Responses = a highly engaged account
Post good content
If you don’t like the content they post, don’t follow the account
If the photos are bad, don’t follow the account -- you don’t need blurry, poorly composed photos clogging up your feed
Are not “cheating” accounts
If an account has 35 posts and 14k followers, it’s a good chance their either famous and brand new at IG or are using a follow/unfollow bot application
Like > Comment > Follow
Now that you’ve decided the account you’ve found is a good one to follow, you have to engage with it by doing the following:
1. Like the most recent post
2. Like at least 3-5 additional posts, but don’t go overboard
3. When you rapidly like 10+ photos in a row, it comes across as spammy
4. Mix it up with a couple recent posts and some older posts (weeks to months old)
5. Comment on 1-3 posts
Ideally, you’d comment on the most recent post, but that’s not always the case
6. Make your comments insightful, not just “amazing shot” or “love this” or a bunch of emojis
7. DON’T ask them to check out your profile and/or follow you…that just reeks of desperation
8. You want to create a conversation, not a one-and-done statement
9. Ask a question about the image or caption
10. Share a personal connection to the post
Follow the account!
DO NOT, FOLLOW-UNFOLLOW. That’s a shitty tactic that people use to keep their follower/following ratio down and it’s not a good practice. If, over time, the account becomes one that posts content you’re no longer interested in, then go ahead an unfollow.
Everything I just mentioned is a good way to get you started. Without putting in the work, you won’t build a following. As Instagram evolves, you need to evolve with it. Good luck!
Do you have more ideas? Share in comments below