92-year-old Paedophile Who Planned To Meet 11-Year Old Girl For Sexx Arrested, Charged & To Be Sentenced 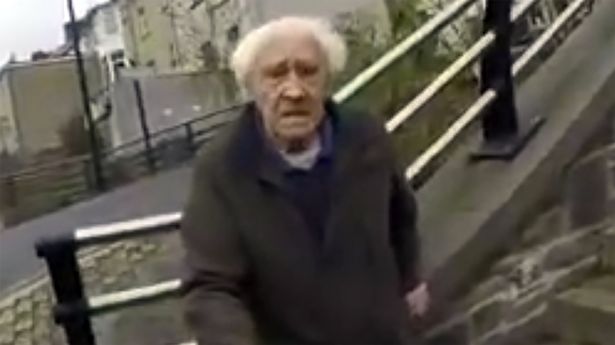 This is the sickening moment a 92-year-old man tries to meet an 11-year-old girl for sex  before he is snared by online vigilantes.

RAF veteran Ivor Gifford now faces jail after he was trapped by The Hunted One group outside a station where he had arranged to meet the fictional girl. The pensioner pervert had told the girl to “wear something sexy”.

When questioned by cops, he revealed how he had learned to use Internet chat rooms to meet young girls for sex after his 68-year-old wife had died in 2014.

He began chatting to what he thought were two girls  Jessie, 11, and Jodie, 12  online but was actually talking to vigilantes.

When he tried to meet the fictional girl at Llanhilleth Railway Station near Abertillery, South Wales, he was confronted by the group, which targets child groomers.

Gifford, the oldest paedophile in Britain to have been caught by The Hunted One, told police after his arrest: "I hope I die before this is out. I know how my family will react."

It was filmed and the court was shown him arriving at the railway station in a taxi when he is called over by the hunters.

One of them can be heard saying to Gifford: "You're 81 years older than this child.
We catch a load of guys - you're the oldest, it's unbelievable. When we found out your age, we were shocked."

The video clip ends with police arriving and leading Gifford into their car.

Gifford, of Abertillery, denied two charges of attempting to incite a child under 13 to engage in sexual activity, and attempting to meet a child.

A jury rejected his claims that he believed the girls to be much older and found him guilty.

He was remanded in custody and will be sentenced on June 2.

92-year-old Paedophile Who Planned To Meet 11-Year Old Girl For Sexx Arrested, Charged & To Be Sentenced