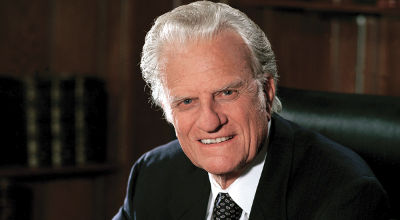 Years ago King Charles V was loaned a large sum of money by a merchant in Antwerp. The note came due, but the king was bankrupt and unable to pay.
ALSO READ YESTERDAY'S DEVOTIONAL: God, Our Helper
The merchant gave a great banquet for the King. When all the guests were seated and before the food was brought in, the merchant had a large platter placed on the table and a fire lighted on it.

Then, taking the note out of his pocket, he held it in the flames until it was burned to ashes. The king threw his arms around his benefactor and wept. Just so, we have been mortgaged to God. The debt was due, but we were unable to pay. Two thousand years ago God invited the world to the Gospel feast, and in the agonies of the cross, God held your sins and mine until every last vestige of our guilt was consumed.

Prayer for the day: In gratitude I kneel before You, Lord Jesus Christ.

Written by Billy Graham, Founder of Billy Graham Evangelistic Association(BGEA). BGEA exists to proclaim the Gospel of Jesus Christ by every effective means and to equip the church and others to do the same.