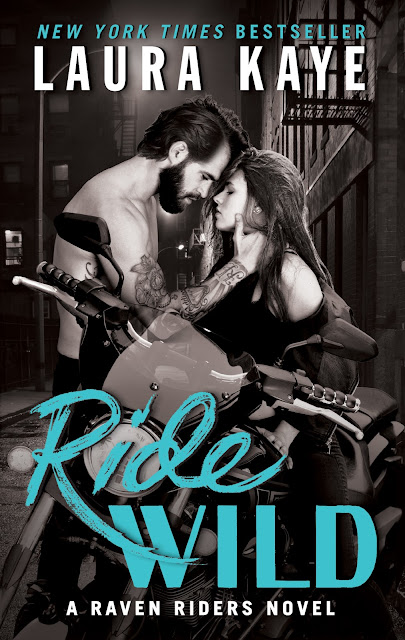 Brotherhood. Club. Family.
They live and ride by their own rules.
These are the Raven Riders...
Wild with grief over the death of his wife, Sam “Slider” Evans merely lives for his two sons. Nothing holds his interest anymore—not even riding his bike or his membership in the Raven Riders Motorcycle Club. But that all changes when he hires a new babysitter.
Recently freed from a bad situation by the Ravens, Cora Campbell is determined to bury the past. When Slider offers her a nanny position, she accepts, needing the security and time to figure out what she wants from life. Cora adores his sweet boys, but never expected the red-hot attraction to their brooding, sexy father. If only he would notice her...
Slider does see the beautiful, fun-loving woman he invited into his home. She makes him feel too much, and he both hates it and yearns for it. But when Cora witnesses something she shouldn’t have, the new lives they’ve only just discovered are threatened. Now Slider must claim—and protect—what’s his before it’s too late.

*ARC provided by publishers in exchange for a honest and unbiased review*
Ride Wild is my favorite MC Romance Book of all time! There I said it! Review over! But in all honesty, to me it is perfection! And as a professional nanny myself, it is truly one of the best nanny romances out there! But before I continue to ramble, let me tell you why I love this book SO much, that I have read it at least 30 times!!
But this book is so much more than a MC Romance or even a nanny romance. It's truly a story about pain, betrayal, protection, and a kind of rebirth, in to a world of Love, companionship, and forgiveness. It is also about relying on others, with not only your good times, but your pain as well, and in part, learning what the true meaning of brotherhood is.
The four main characters in this book are one you have met before, if you have read the authors series. You meet Slider, Sam, and Ben in the Raven Riders (this) series and we first meet Cora in the Hard Ink series, Ride Wild is a perfect completion to all the loose ends from the Hard Ink series, and you heart truly breaks for them all.
Overall, the writing is fantastic, plot is delicious, and in my case, hard to ever let Go! Causing you to read it again and again. Laura Kaye is truly an amazing author, and if you read any of her books, you will get sucked in! And you will never want to leave!
I give Ride Wild 5 stars 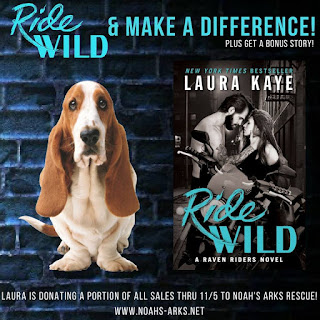 Animal rescue is a big part of the storyline of RIDE WILD, and that’s something that's close to Laura’s heart, so Laura’s giving to the cause by donating a portion of all preorders and sales through 11/5 to Noah's Arks Rescue, a fantastic organization that serves as a source of inspiration for the book. When you grab your copy of RIDE WILD, you're helping a great cause AND you'll get a bonus story when you submit your order info, too!

Submit Your Preorder Info to Get A Bonus Story:https://a.pgtb.me/HRn7Bc
Learn More about Noah's Arks: http://www.noahs-arks.net/ 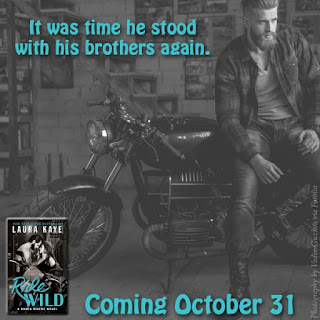 Slider wrapped himself around her, his forehead against hers, his arm around her shoulder. She pulled him closer, needing his touch, needing his comfort, needing him.
Eyes still flooding, Cora heaved a deep breath, then another, until her breaths were shuddering but becoming more even. But her eyes wouldn’t stop leaking. Damnit.
“Come here,” Slider said, his voice full of grit. He pulled her off the bed and into his lap there on the floor of her bedroom.
Cora wrapped her arms around his neck. “Just being stupid,” she said.
“No way,” he said. “Big hearts are bound to get bruised, Cora, and yours is the biggest I’ve ever seen.”
And now she was crying again. She laid her head on his shoulder, her face pressed to his neck, and cried herself out until she was limp and exhausted. He rubbed her back and stroked her hair the whole time, just holding her and being there for her. And, man, that would’ve been enough. But it was the little kiss against her hair that had her too-big heart feeling entirely too full for her chest.
For being wrecked, broken, and more than a little lost, Slider Evans had a well of sweetness so deep that Cora wasn’t sure how she’d ever find her way out. Or if she even wanted to.
On another deep breath, Cora finally lifted her face and met Slider’s blazing light green eyes. He cupped her face in one big hand and swiped at her tears with his thumb, but it wasn’t enough, so he lifted the edge of his shirt and used that instead.
Cora managed a chuckle, even as she messed him up to put herself back together. “Sorry.”
“Don’t be,” he said, his voice full of gravel. “Aren’t we a pair?” He swallowed hard. “You feel so much, and I can’t feel enough.”
The words were so revealing that they nearly made her gasp. “Oh, Slider,” she said. “I think you feel more than you let on.” She hadn’t meant her, but the flare of those strange eyes told her he took it that way. And it made her want to backpedal. Fast. “I mean—”
He kissed her. Hand in her hair, his lips came down on hers in a soft press of skin on skin. It wasn’t the frenzy of their first kisses in his bed, but there was an intimacy in the softness, in the sweetness that hit her just as hard.
When he pulled away, his expression was intense and thoughtful, like he wanted to say something and needed to figure out exactly what it was. And then he nailed her with a stare and said, “Cora, you—”
Knock, knock. “Dad?” Sam called from outside Cora’s door.

Laura is the New York Times and USA Today bestselling author of over twenty books in contemporary and paranormal romance and romantic suspense, including the Hard Ink and upcoming Raven Riders series. Growing up, Laura’s large extended family believed in the supernatural, and family lore involving angels, ghosts, and evil-eye curses cemented in Laura a life-long fascination with storytelling and all things paranormal. She lives in Maryland with her husband, two daughters, and cute-but-bad dog, and appreciates her view of the Chesapeake Bay every day.