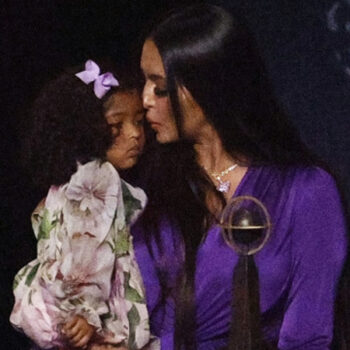 Vanessa Bryant and her oldest daughter, Natalia Bryant, honored Kobe Bryant well at the Naismith Memorial Basketball Hall of Fame ceremony on Saturday (May 15). Kobe was inducted into the 2020 Hall of Fame class. Natalia wore her father’s jacket the day before the event while Vanessa gave a heartfelt tribute at the ceremony.

“I used to avoid praising my husband in public because I felt like he got enough praise from his fans around the world and someone had to bring him back to reality,” Mrs. Bryant said. “Right now, I’m sure he’s laughing in heaven because I’m about to praise him in public for his accomplishments on one of the most public stages,” the celebrity shared. “I could see him know, arms folded, with a huge grin saying, ‘Isn’t this some s—?’ He’s still winning,” Vanessa declared.

Kobe Bryant was killed in a horrific helicopter crash on Sunday, January 26, 2020. The NBA legend’s daughter, Gianna “GiGi” Bryant, was also killed along with seven other passengers aboard the aircraft.

“I wish my husband was here to accept this incredible award,” Vanessa Bryant said during Saturday’s ceremony. “He and Gigi deserve to be here to witness this,” Mrs. Bryant added. “Gigi would be so proud to watch her daddy get enshrined in the Basketball Hall of Fame. I know Kobe was looking forward to being here. He asked the Hall of Fame to specifically add a sixth ticket for Capri, he was so happy.”

Capri is Kobe and Vanessa Bryant’s youngest child. She was born on June 20, 2019, which was just six months before Kobe’s untimely passing.

“There will never be anyone like Kobe,” Vanessa told Saturday’s attendees. “Kobe was one of a kind,” she added. “If my husband were here tonight, he would have a long list of people to thank that helped inspire him and equip him to be in the Hall of Fame. Family, friends, mentors, the Lakers, teammates, muses, and opponents. This is one of the hard parts of not having him here. At the risk of leaving anyone out, I can only say thank you. To all those who helped him get here, you know who you are and I thank you on his behalf.”