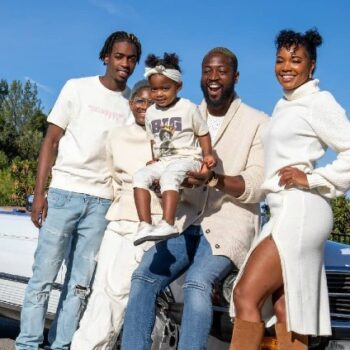 Gabrielle Union surprised her husband, Dwyane Wade, with a vintage Mercedes-Benz ahead of his 39th birthday.

On Sunday, Wade took to his Instagram to share a video of him getting his birthday surprise. In the clip, the father of four can be seen being led outside by his wife and finding a white 1988 Mercedes in his driveway. The footage was captured on camera by his 18-year-old son, Zaire Wade.

“One week before I turn 39 and @gabunion has already started with the surprises ,” Wade captioned of video. “She just raised the bar#1988 Classic!”

The former Miami Heat player, who turns 39 on January 17, made sure to thank his wife by giving her a big hug. He then exclaimed, “Damn, baby, this is nice!”

Gabrielle Union recently opened up about the quarantining with her hubby of six years.

“It has been hard during the quarantine because we are in the same space,” she explained on Taraji P. Henson’s new mental health Facebook Watch series, Peace of Mind With Taraji. “I have not been home in any kind of consistent way since I have been an adult. So just getting to know my husband, which sounds crazy. I was like, ‘Oh, every day, every day you’re going to be here? I guess this is healthy.’ I just feel a little more naked, exposed, because I’m just on Zoom with the therapist.”

The ‘Being Mary Jane’ star continued, “You’ve got to find out, do you love me for all of the baggage? It’s like a Tumi store. There’s so much baggage,” she said. “You get worried that maybe you have revealed too much and you’re going to scare them away because damaged women aren’t supposed to be lovable.”

As for being on lockdown with kids, Gabrielle says that she is getting a lot of help from her sister and other relatives. “Needing help does not make you weak or vulnerable — it just means you need help like everybody else,” she noted.