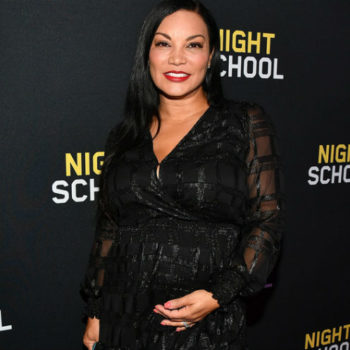 Congratulations to Egypt Sherrod and her husband, Mike Jackson (DJ Fadelf), who are expecting a girl to arrive in the coming weeks. The celebrity couple decided to announce the gender of their unborn child earlier this week.

“First looks at our little girl. That’s right I said GIRL,” Egypt exclaimed. “Girl number three for our family,” the HGTV star continued. “Three is a charm! Is it me, or does it look like she is being kissed by an angel while in my belly? Take a close look at the image … it looks like someone kissing her upside down.”

girl number three for our family. Three is a charm! Is it me, or does it look like she is being kissed by an angel while in my belly? Take a close look at the image above her…. it looks like someone kissing her upside down.

Someone said it was GOD breathing life into her. Another comment was that the angels were whispering everything she needed to know so that she could overcome all the earthly obstacles that may come her way. @Djfadelf and I are ecstatic even though he realizes he is vastly outnumbered now.

Fans learned of Egypt Sherrod and Mike Jackson’s expectancy earlier this year. Sherrod promised to make the official announcement on the radio, but fans figured things out a bit early and began congratulating the Flipping Virgins star on her pregnancy.

“Congrats to you and the hubby,” one social media follower exclaimed. Another fan wrote, “Congrats. I remember you said the last told you [that] you were expecting and you didn’t believe it.”

Sorry Woody I’m taken. Then he says “What’s your man got to do with me?”

Egypt Sherrod gained notoriety for her disco jockey skills that led to a spot on television. “Radio had been excellent to me, but I was growing out of it,” the real estate investor revealed during an interview with XO Necole. “I definitely was growing out of the gossip, I really didn’t care who was doing who…I hated that I had to do entertainment and gossip reports. But unfortunately, it was something very popular that I had become known for.”

Victory Thought: Not everyone can go where GOD is trying to take you. Before he can elevate us, we have to clean house. Recognize that there are some circumstances where we have given all that we have to give. There are some relationships that you have been hanging onto by a string simply because of “time vested”, which really translates to “glutton for punishment.”

Your inability to let go is what is hindering you from moving forward. There are some battles that are just not ours to fight and some apologies due to us that we will never receive. But it’s time to let go and love those people from afar. Stop opening the door on toxic energy and seek closure. Choose YOU, choose Happy! #stopretreat #womensempowerment conference #Destin #SpeakLife #VibrateHigher #Pregnant&Preaching. #BookMeToSpeak

Sherrod worked to change her public image so that it could reflect her true passion, which is real estate. Now, she has a show of which she can be immensely proud.

What will Egypt Sherrod and Mike Jackson name their unborn child? We’ll have to stay in tune with the couple to find out! Stay tuned for more celebrity expectancy news!