Is Trump growing too fond of military force? 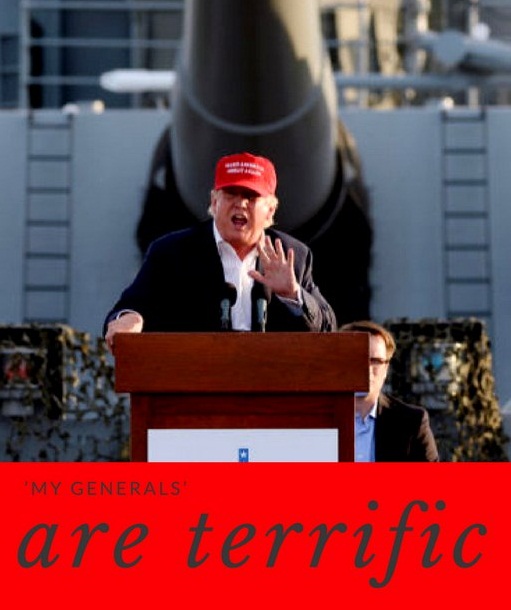 On the campaign trail, Donald Trump “vowed to make the U.S. military so strong that he’d never have to use it,” said William Astore in Salon.com. But in the past two weeks, Trump has turned out to be a commander in chief who deploys military power “with gusto, if not abandon.” First came the cruise-missile attack on Syria, whose civil war Trump the candidate had said was none of our business. Then, last week, U.S. forces dropped the largest non-nuclear bomb in our arsenal on a network of ISIS tunnels and caves in a remote region of Afghanistan. The 21,600-pound Massive Ordnance Air Blast bomb (MOAB), known colloquially as “the mother of all bombs” was developed in 2003, but was never deployed until now. Is anyone really surprised that this is happening? said Lucy Steigerwald in DailyCaller.com. For all his earlier talk of restraint, how could Trump, of all people, resist the temptation to start setting off “the best, the fanciest, the most expensive weapons” in the world?
“America is back,” said Charles Krauthammer in NYDailyNews.com. Trump’s “swift, decisive” actions in Syria and now Afghanistan have put the world “on notice” that President Obama’s eight years of “agonized hand-wringing” have officially ended. Paradoxically, the most likely result of this theatrically effective show of force will be a more peaceful world, as dictators in Pyongyang, Damascus, and Moscow will have second thoughts about testing Trump’s resolve. Obama micromanaged America’s wars and tied the generals’ hands, said David French in NationalReview.com. That led to a mindset of “timidity.” Trump declared last week that he has given the military “total authorization” to deploy tactics and weaponry such as MOAB as they see fit. That’s “a change that’s long overdue,” and it will make our armed forces more effective.
Don’t be so sure of that, said Kimberly Dozier in TheDaily Beast.com. By delegating tactical decisions to the men he calls “my generals,” Trump risks running up large numbers of civilian casualties as he already has in the battle for Mosul in Iraq. Killing innocents is a surefire way to alienate people in the nations where we battle for hearts and minds as well as territory, and can lead to more not less terrorism. Generals are better at tactics than at geopolitical strategy, said Jeffrey Sachs in The Boston Globe. Ultimately,  the big decisions about whom to attack and with what must be made by our “impetuous, unstable, and inexperienced” commander in chief. That’s terrifying: In Trump’s ego-driven confrontations with other nuclear powers, one big mistake “could end the world.”
In the short term, Trump’s “unhinged impulsiveness” may actually be effective, said Fred Kaplan in Slate.com. He’s unwittingly relying on what Richard Nixon called the Madman Theory of geopolitics—a strategy in which a world leader acts as if he’s capable of anything, including nuclear war, thereby making other nations more cautious and willing to negotiate. In the long term, however, erratic national leaders often lose allies, who seek out more dependable protectors. Wily enemies such as Russia’s Vladimir Putin and China’s Xi Jinping, meanwhile, may learn how to use Trump’s impulsivity to trick him into emotion-driven, self-defeating actions. The president is right to try to revive the “deterrent power” of our military might, said Victor Hanson in NationalReview.com, but no one should underestimate the risks here. After eight years of American passivity and retreat, aggressive nations such as China, Russia, Iran, and North Korea “will bristle” if Trump insists they back down. However just our cause, we are entering a “dangerous moment.”

11 Unforgettable Things to Do in Beli…
What would happen to a modern-day Mos…
Firebird – Making Of Story
30 Epic 50s Hairstyles for Men That A…
Cambridge Mask Co. – Face Masks with …


This post first appeared on FOXI News, please read the originial post: here
People also like
11 Unforgettable Things to Do in Belize — Important Tips & Places to Stay
What would happen to a modern-day Moses in America?
Firebird – Making Of Story
30 Epic 50s Hairstyles for Men That Are Popular Again
Cambridge Mask Co. – Face Masks with the World’s No. 1 best filter technology

Is Trump growing too fond of military force?