The party of Reagan embraces Trumpism 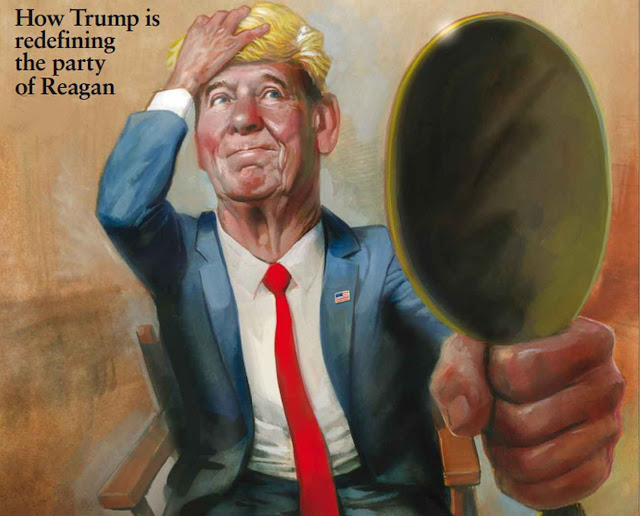 “May Conservatism rest in peace,” said Dana Milbank in WashingtonPost.com. Once upon a time as recently as last year, in fact the annual Conservative Political Action Conference was a place for right-wing politicians and policy wonks to reaffirm their faith in free markets, limited government, reforming entitlements, and “U.S. leadership overseas.” This year’s event, however, held last week, was a celebration of President Donald Trump and his promises to rip up trade deals, spend heavily on infrastructure, keep Medicare and Social Security intact, and put “America first.” CPAC organizers and the crowd greeted Trump like a conquering hero, with nary a word of dissent. In his keynote address, Trump “did not once use the words ‘liberty’ or ‘Constitution,’” said Tim Alberta in Politico.com. Nor did he once mention Ronald Reagan, or reducing the size of government. More telling still was the dominant presence of Steve Bannon, Trump’s chief adviser, who had been banned from CPAC in previous years because of his association with the racially charged “altright.” This year, a smug Bannon gave a keynote presentation on “economic nationalism,” which he defined as protecting the working class from what he called “globalism” and “corporatism.” The president has been in office only a month, but it’s not an overstatement to say that “the conservative movement is Donald Trump.”
Conservatism needed an infusion of fresh blood, said David Webb in TheHill.com. The Right was stagnant until Trump gave us a “21st-century Republican Party” to rally behind. Would Trump’s brand of nationalist populism have thrilled the hordes of bowtied intellectuals who cheered Ronald Reagan’s CPAC address in 1977? Probably not, but different times call for different messages. Skeptical conservatives need to “stop looking for the next Reagan,” and support the man who regained them the White House. “The Republican Party Trump relationship is still evolving,” said Ed Rogers in WashingtonPost.com. It’s not clear whether congressional Republicans will follow his lead on such issues as immigration reform, building a wall, and taxing imports. It’s not even clear that Trumpism can co-exist with traditional conservatism, as embodied by House Speaker Paul Ryan and Senate Majority Leader Mitch McConnell. Trump might revitalize the GOP, or he might fracture it into warring factions.
This much is sure: “The Reagan era is over,” said James Hohmann, also in WashingtonPost.com. The sunny 40th president “embraced freedom in all its forms,” and would be horrified by Trump’s isolationist and protectionist rhetoric, his cynical embrace of Russian dictator Vladimir Putin, and his “dark portrait” of a failing, crime- and drug-ravaged America overrun by terrorists and illegal immigrants. Trump and his supporters are “animated by grievances” more than by principles, said Peter Wehner in RealClearPolitics.com. In their “political tribalism,” they have redefined conservatism downward to mean anything that demonizes foreigners and “infuriates the Left.”
Is Trumpism “conservatism’s future?” asked James Antle in WashingtonExaminer.com. That remains to be seen. At the moment, Ryan and other leaders of the Republican establishment are working with Trump because they need his support for such long-standing conservative agendas as tax cuts, deregulation, and killing Obamacare. But “that does not mean they have embraced his more distinctly Trumpist views.” Whether his takeover of conservatism lasts “depends on whether  the Trump administration succeeds” in the eyes of the voters. Remember: In politics, “things change quickly.”

The party of Reagan embraces Trumpism