Is Trump at war with reality? 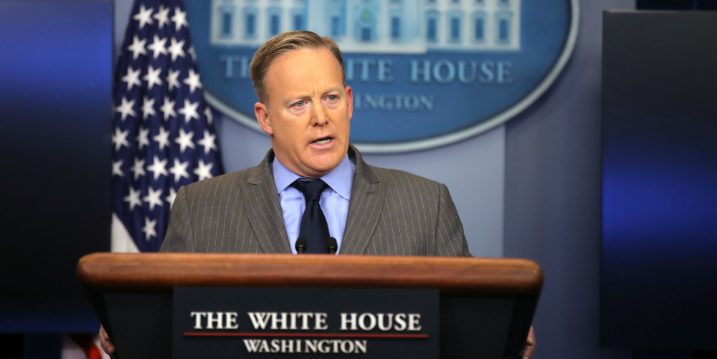 The first task of every autocrat is to “delegitimize facts,” said Ezra Klein in Vox.com, and President Trump is off to a flying start. On his first full day in office, Trump sent an irate press secretary Sean Spicer to dress down the White House press corps and proclaim it was “shameful and wrong” of the press to have shown photos suggesting that the crowd at Trump’s inauguration was two or three times smaller than the one at President Obama’s in 2008. Spicer insisted using a slew of easily disproved claims that Trump’s had been “the largest audience to ever witness an inauguration, period.” In a rambling, self-aggrandizing speech at CIA headquarters that same day, Trump also insisted the media had lied about his crowd size and had invented his blistering criticisms of the intelligence service criticisms that could still be found on Trump’s Twitter feed. The most chilling sound bite came from Trump adviser Kellyanne Conway, who on Meet the Press used the Orwellian phrase “alternative facts” to characterize Spicer’s blatant falsehoods. “This is not a conventional dispute over facts,” said Greg Sargent in WashingtonPost.com. Trump is trying to discredit not only the press’s critical role in our democracy but also the idea of “factual reality itself.” For at least the next four terrifying years, “the truth is what Donald Trump says it is.”
The president must be held accountable for his falsehoods, said David French in NationalReview.com, but “those with no credibility make poor critics.” The same reporters now apoplectic over Trump happily swallowed the Obama administration’s serial deceptions for eight years on Obamacare, Benghazi, the IRS investigation of Tea Party groups. Worse, said Sean Davisin TheFederalist.com, Trump had barely been sworn in before mainstream outlets were circulating lies of their own, including that he removed a bust of Martin Luther King Jr. from the Oval Office, and “blew a kiss at” and “hugged” FBI Director James Comey at a meeting (it was actually a handshake and arm pat). This nation “desperately needs” a source of unbiased, credible information, but based on the media’s overt hostility to Trump, “that institution does not currently exist.”
The reporter who made the mistake about the King bust issued a correction and an apology, said Jennifer Rubin in WashingtonPost.com. Compare that with President Trump, who this week yet again insisted on the dangerous falsehood that up to 5 million illegal immigrants voted for Hillary Clinton in November. Clearly, “Trump cannot help himself. He lies because reality won’t conform to his narcissistic view of the world.” Trump’s insecuritydriven “war with math” goes back to his days as a TV star, said James Poniewozik in NYTimes.com, when he would insist The Apprentice was the “No. 1 show on television,” even though ratings showed it was the 67th. The fact that he lost the popular vote to Clinton by nearly 3 million votes rankles him deeply, as did the fact that his inaugural crowd was smaller than both Obama’s turnout and the Women’s March. These facts can’t be true and must be denied, because “Donald J. Trump is not a loser.”
The press faces a real danger here, said Ross Douthat in The New York Times. It serves Trump’s interests to portray his disregard for facts as a partisan war with the press, and he has a gift for dragging his opponents down to his level of venom and hyperbole. If the president provokes journalists into “a kind of hysterical oppositionalism, a mirroring of Trump’s own tabloid style,” they will delegitimize themselves, and do the “demagogue’s work for him.”


This post first appeared on FOXI News, please read the originial post: here
People also like
64 Awesome Things to Do in Costa Rica, Where to Stay, Know Before You Go
Donald Trump is no longer coming back to Twitter even if Musk removes his ban
NBA Jam Game Comparison
What would happen to a modern-day Moses in America?
Megan Thee Stallion Details Alleged Tory Lanez Shooting: ’He Said, ‘Dance, B—,’ and He Started Shooting’
5 Best Back Shavers: Buyer’s Guide & Detailed Reviews
Advisors' Creative Solutions for Getting their Clients Tested Before Travel
Kinguin – 64% discount on Risk Of Rain 2 Survivors Of The Void

Is Trump at war with reality?