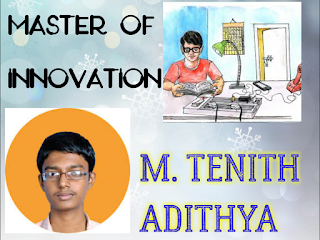 While most of the kids of his age are engrossed in playing video games or busy with other teen stuff, this boy is busy in his own world of innovation and experimentation. All his hard work and passion has won him 15 awards for his varied inventions. Meet meet the young genius M.Tenith Adithyaa.
Adithyaa does not believe in living with problems but believes in solving them. This is the vision that drove him owing to which he already has 17 inventions under his name which have helped him in bagging many awards along with two Guinness World Record attempts.
He already has a lot of achievements in his name  and he also makes sure to learn something new every day. At such an early age he is not only an innovator, but also a professional coin collector, a software developer, a teacher, a bird tamer and a gamer.
By the time he was in his 4th standard he started to study computer applications and currently he has already mastered 35 computer applications and 6 languages. Maximum time of the day he spends in his lab to come up with various innovations and solutions so that he can help society grow. Mostly he is up till 3.00 am in the morning experimenting in his lab and due to which he is not able to reach class on time and is punished to stand outside class.
The journey has not been easy, but he believes that small setbacks cannot restrict you from doing or achieving what you intend to achieve. There was one such incident when he was experimenting in his lab with some chemicals and by mistake he inhaled some dangerous fumes because of which he had to be hospitalized. This incident was an eyeopener for his parents who thereafter restricted him from performing any experiments, but the science enthusiast he didn’t give up and carried on with his search for other new ideas and passionately came up with other interesting inventions inventions.
While experimenting he needed many electricity plug points to run various devices all at the same time and using many extension cords/power strips was cumbersome, so to solve this problem he developed an electricity extension board which was adjustable,  and in it one can put any type of electric plugs in the space available. The created device is effective up to a distance of about  3 meters, and the model is ready to be  commercialized.
Use of plastic plates create a lot of waste, so he came up with an idea to make cups and plates with banana leaves. The technology is useful in preserving banana leaves for almost a year without any use of chemicals. In addition to it also increases their durability. The advantage of these these leaves is that the preserved leaves can resist extreme temperatures and hold more weight than the original ones. The manufacturing cost of these plates and cups is very low and they can also be used as manure if they are disposed  off in the right way. This project has been approved by The Ministry of Environment and Forests, GOI and Adithyaa has also  received various awards for the same.
Due his so many contributions at such a young age he has received global recognition which includes 2 world record attempts, 2 National Awards, 7 Titled Awards, 5 State Awards and many District Awards.Not only this he is also a winner of the IGNITE Awards conducted by National Innovation Foundation-India. Adithyaa was also selected for the inaugural “Innovator in Residence” program of the President office which was launched by the Honorable President of India, Shri Pranab Mukherjee on the occasion of birthday on December 11, 2013. And he also stayed at Rashtrapati Bhavan from July 1 to July 20, 2014  where he was  mentored by the office of the President House!
The young achiever has great future plans and wants to become an aerospace engineer and join ISRO where he can carry on his experimentation on a larger scale. We just wish him All the very Best for his future endeavors and hope that he brings more laurels to our country with his future inventions.
Moral :~
Age doesn't matters for acquiring knowledge. It's one who is live example for us.

'Kroos messaged me at 4 am': Casemiro…
6 Brainy Ways to Proceed When You Owe…
Xiaomi Opens its First Authorized Sto…


This post first appeared on Inspire World, please read the originial post: here
People also like
'Kroos messaged me at 4 am': Casemiro reveals he decided to leave Madrid after Champions League final
6 Brainy Ways to Proceed When You Owe IRS Back Taxes
Xiaomi Opens its First Authorized Store in Nigeria