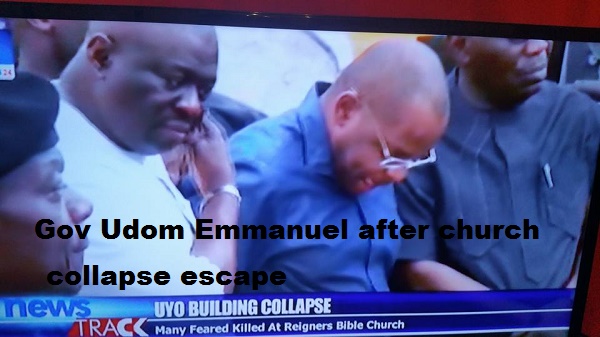 Tragedy happened in Nigeria as the Reigners Bible Church collapse in Uyo has left more than 60 people dead!The building in Akwa Ibom state had been packed with people including the governor of the state,Udom Emmanuel as well as the founder,Apostle Akan Weeks who was going to be ordained as a Bishop.The two men managed to escape with their lives.
I saw pictures that i cannot load here that made me weep inside,poor innocent souls who had gone to
worship for everlasting lives,had theirs taken so cruelly.People lying on the floor in blood,some with heavy metals on top of them,this is so sad.And many more losses are still expected according to witnesses and unconfirmed official reports.

An eye witness being interviewed said,the incident happened just after the tithes and offering had been taken,and in about a minute or so,the roof of the auditorium gave in causing pandemonium.
This latest incident really breaks my heart because of all the cases that we have had in the country so far,this was the most unnecessary deaths of innocent people that could have been well avoided.The Church building was clearly still being reconstructed.Their were builders everywhere,and they were clearly rushing to meet a deadline.Why the rush?Why the do or die?Would the world have come to an end if the ceremony had been postponed till next month to guarantee safety?

Sadly it always the innocent and the poor man on the street that bears the grunt of things like these.The founder,
Pastor Weeks and the man who runs the state escaped with their lives as i said earlier.We have now heard the usual shouts of an investigation to take place and the culprits will be brought to book.But we know nothing ever happens.Judging by the governor's appearance at the event,the organizers have some VIP connections,so do you seriously think the founder will be held responsible and jailed?No way.At the very most,they will rope in a contractor and he will pay the price.But really,he and the man at the top who gives instructions should go down for this.

It brings to mind the collapse of Prophet TB joshua's Synagogue Church of All Nations collapsed in Lagos,where 116 people died.Mostly foreigners from countries like South Africa.Has anyone been held accountable 2 years later?

Two structural engineers,as well as the influential Joshua and trustees have been accused of criminal negligence and involuntary manslaughter after a coroner found the building collapsed from structural failures caused by design and detailing errors.But till today,there has been no conviction.

Four Things Jesus Says About a Discip…
Best Story-Rich Games on PC: November…
21 Most Instagrammable Places In Peru…
Rare Antique Rugs Topkapi Palace Muse…
The Stories Behind 10 Rock Band Logos
Sadly the Reigners Bible church,Uyo,will probably be not the last time this nonsense happens in Nigeria.This is a chance for governor Udom Emmanuel to sow he really has the interest of the people at heart and make sure justice is done for all those who had lost their lives unnecessrily.RIP to the dead.