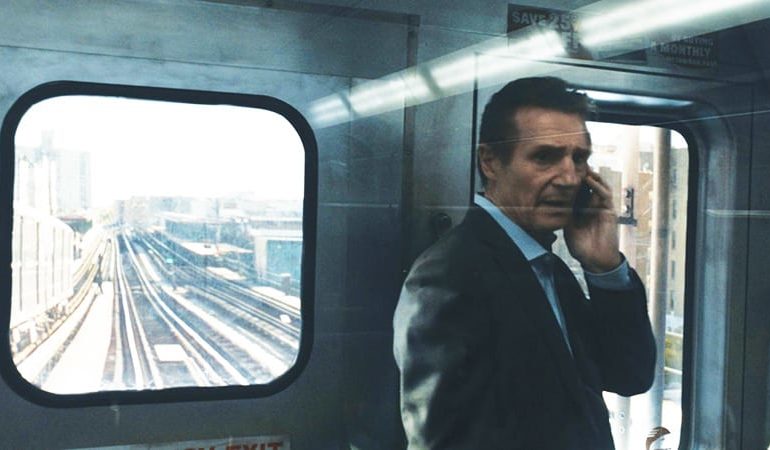 First Daniel Day-Lewis announces he’s retiring from acting after Phantom Thread, now Liam Neeson says he won’t be doing any more action movies. (His excuse? “I’m sixty-f**king-five!”) What’s the world coming to? Still, if the tight little smile of triumph he wears in the final shot of The Commuter is going to be our last glimpse of Neeson the action hero, that’s not a bad way to go – and the same could be said of the film as a whole, the fourth collaboration between the big Irishman and Barcelona-born director Jaume Collet-Serra after Unknown, Non-Stop and Run All Night.

Three of the four owe an obvious debt to Hitchcock (Run All Night is more of a crime drama), though they also resemble each other. The Commuter is a lot like Non-Stop, placing Neeson in a confined space – a commuter train, in this case – where he has to identify a mystery person: in Non-Stop it was a terrorist who was threatening to kill a passenger every 20 minutes, in The Commuter it’s someone named Prynne, about whom we know very little except that he (or she) is carrying a bag and, crucially, ‘doesn’t belong’ on the train. Prynne, in other words, isn’t a regular – unlike Michael MacCauley (that’s Neeson) and most of the other passengers, who go back and forth on the train every day.

Michael’s orderly life is depicted in an opening-credits montage that instantly grabs the attention, turning the cliché of a boring routine into something jagged and jumpy (Michael’s routine is even more boring for remaining the same even as the shape and rhythm of the shots changes), as well as providing exposition about our hero: he has a wife and son, he’s a bit over-protective, he enjoys classic novels, etc. The film is full of small pleasures, especially in the first half. Michael (who’s an ex-cop) has a drink in a bar with his old partner Alex (Patrick Wilson); they’re interrupted by a Captain Hawthorne (Sam Neill) – and, just as Michael leaves, a look passes between Alex and Hawthorne, just enough to add a certain undercurrent. Later, on the train, our hero is handed an envelope containing just one thing: a wedding ring matching the one on his own finger – a neat visual way of imparting the news that the baddies have his wife.

The Hitchcock connection is of course The Lady Vanishes, plus a whole sub-genre of tense, train-set classics (The Tall Target, The Narrow Margin, etc). There’s a film-noir touch in the femme fatale (Vera Farmiga) who approaches Michael on the train, her distinctive shoes – the only thing we initially see of her – recalling, say, the killer’s distinctive collar in D.O.A. Best of all, The Commuter is one of those films where a hero’s quest forces him in contact with a swathe of diverse humanity: passengers include the obnoxious Wall Street trader, the teenager lost in her headphones, the guitar-toting black guy, the young girl with dyed hair and a pushy boyfriend. One of them is presumably Prynne, but who? Michael swings into action, knocking out the AC so as to force everyone in the last carriage, like Poirot gathering the suspects. Hitchcock, film noir, detective mystery; The Commuter is likeably eclectic in its influences.

The plot doesn’t really make sense, which is not surprising; even Hitchcock’s plots didn’t always make sense, hence his well-known disdain for ‘the Plausibles’. Suffice to say that diverse humanity – “It’s so miscellaneous!” notes Farmiga, looking around at the carriage – stands up in all its diversity at the goofy climax, adding Spartacus to the list of influences, then Unstoppable also gets cited with the brakes failing and the train careening out of control. That should really be the ending but instead there’s another ending, then another; the film is overlong, and its first half is by far the better.

Still, this is bouncy entertainment, with enough shape-shifting fun on the fringes to disguise a sloppy centre – and of course there’s Liam Neeson, not just giving Mr. Goldman Sachs the middle finger on behalf of middle-class America but also getting in a couple of magnificent scraps that leave him bruised and battered (maybe he is getting too old for this shit). “I wish I was 45 again,” mutters Michael wryly when Alex complains of being 45 and divorced – but instead he’s 60, as the film makes a point of pointing out, five years from retirement and clearly on the brink of obsolescence. The Commuter may be obsolete too, the kind of cheesy, non-franchise action thriller that’s mainly designed for TV and DVD, a shrinking market in the age of series and binge-watching; like its star, this type of lively B-movie may be on its way out. We’ll miss them when they’re gone.

Cambridge Mask – Face Mask For Travel…
The Friday Roundup – Originality, You…
All You Need to Know Before Heading t…
Alec Baldwin Rust Shooting: New Video…
Will there be homeless people in Heav…


This post first appeared on Chrisblend, please read the originial post: here
People also like
Cambridge Mask – Face Mask For Traveling with Peace of Mind
The Friday Roundup – Originality, YouTube Editing and 3 Point Lighting
All You Need to Know Before Heading to Scotland, Things to Do, Not to Do, and Brilliant Advice
Alec Baldwin Rust Shooting: New Video Released Of Halyna Hutchins’ Death
Will there be homeless people in Heaven? Who cares?