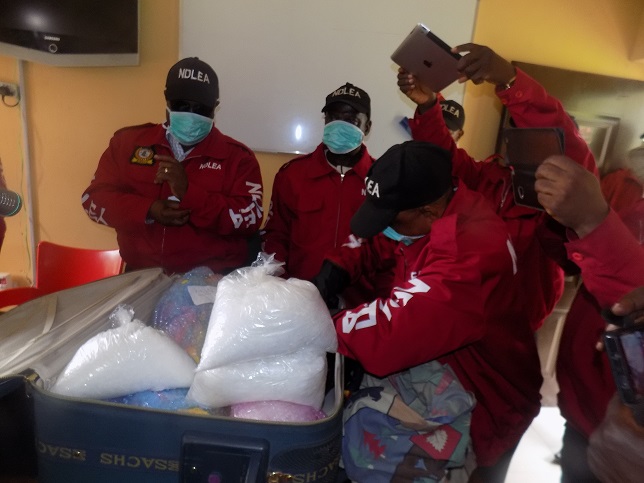 The Abia State Command of the National Drug Law Enforcement Agency ( NDLEA ) said that the agency seized about a ton of illicit drugs in the state. This is even as it said that it arrested 324 drug addicts within the state.

The State Commander of NDLEA, Akingbade Bamidele is a chat with journalists in Aba, the commercial nerve of the state while reviewing the activities of the command in 2017 said that out of the 324 suspects, 304 were males while 20 were females.

According to him, 24 persons underwent rehabilitation in their facility, while they secured 53 convictions, adding that other cases are still ongoing in various High Courts in the state.

He further disclosed that the agency counseled and released 78 drug suspects arrested at various drug joints in the state and later handed over to their family members.

The NDLEA boss who said that the agency was working to secure court order to set ablaze about 6tons of exhibits in the facility whose cases have been concluded stated that they would not be relenting on their oars in nipping the activities of drug merchants and addicts in various notorious drug spots in the state in the bud.

Akingbade who thanked other sister security agencies especially authorities of the 14Brigade, Ohafia for their support while they raided villages such as Arochukwu, Okonu Ohafia respectively where some drug barons were smashed however, lamented the activities of some youths and village leaders who shield drug dealers in their community from being arrested by its personnel during their raids.

Expressing worries over the high rate of drug abuse among the youths who he accused of combining depressants and stimulants as substitutes for cocaine before committing all manner of crimes including armed robbery, rape, kidnapping etc said that they were going to establish drug-free clubs in schools to ensure that they educate the youths on the dangers of using hard drugs, adding that they would be establishing their outposts at strategic places to ensure that the war on the sale and consumption of illicit drugs in the state was total.

The NDLEA boss who said that the agency would continue to engage patent drug dealers in a roundtable discussion on the need to sell drugs to only the people with drug prescription from qualified and approved physicians warned youths against consuming illegal and prohibited drugs.

He called on the state and federal government to come to their aides, adding that with the provision of adequate logistics, the agency would do more in its fight against illicit drugs.