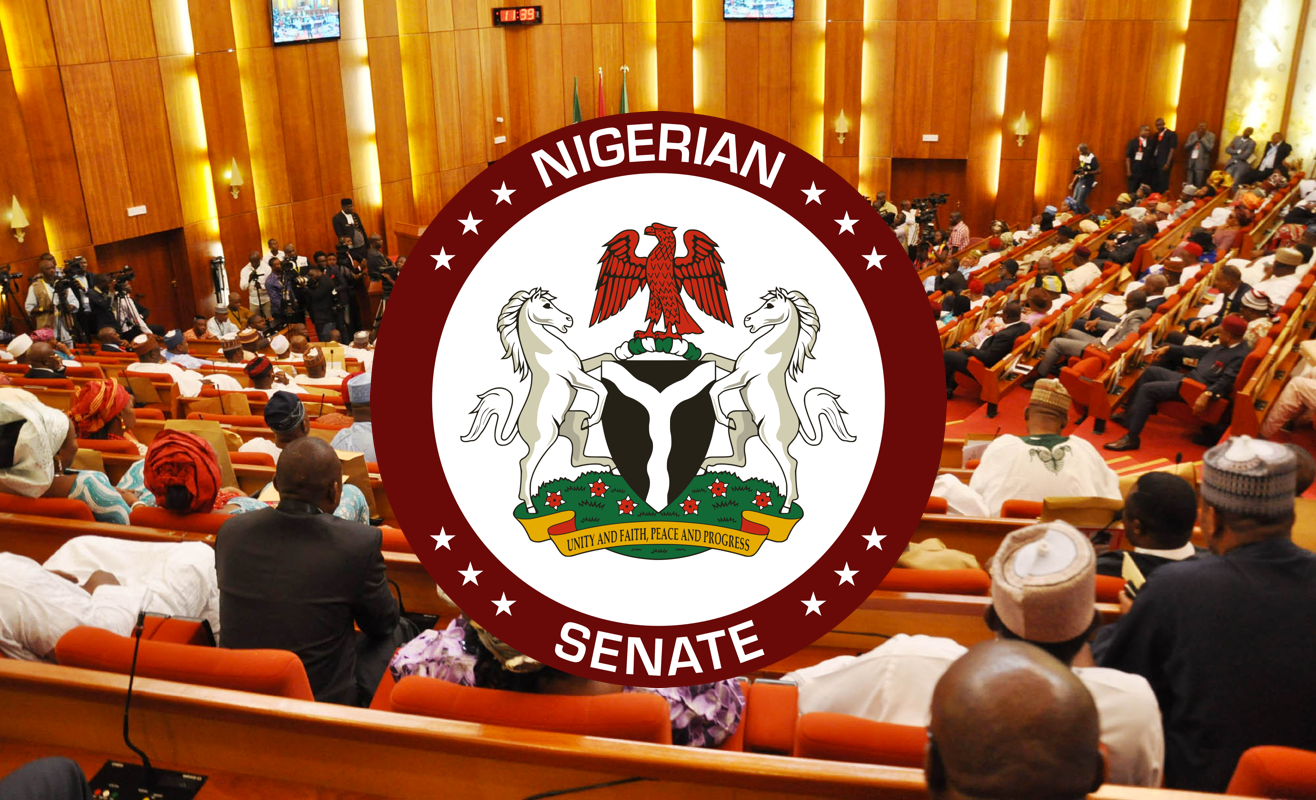 The Senate Wednesday rejected report of its Committee on Police Affairs and National Security and Intelligence which linked the unabating killings in Benue State to Fulani Herdsmen and Benue militia men.

The upper chamber said that the report is incomplete because it quoted the Inspector General of Police, Ibrahim Idris copiously while it did not feature the position of Benue State Governor, Samuel Ortom.

The lawmakers agreed with the Senate President, Abubakar Bukola Saraki that the committee should go back and complete its assignment and report back within one week.

The Senate at its sitting on 31st January, 2018 considered a Personal Explanation by Senator Joshua  Lidani who drew the attention of the Senate to its resolution on the Ad-hoc Committee on Security visit to Benue State which stated “that the Senate do urge the Inspector General of Police to within Fourteen (14) days apprehend and investigate the perpetrators of this act; and the Benue State Attorney General to prosecute the offender(s); and resolved to; “Mandate its Committees on Police Affairs; and National Security and Intelligence to summon the Inspector General of Police (IGP) on 1st February, 2018 and report to the Senate on 6th February, 2018.

Senator Ibrahim noted in his report that the Inspector General of Police appeared before the committee on Friday, 2nd February, 2018 and in his written presentation, IGP briefed the committee as follows:

i) That following the outbreak of violence in some parts of Benue State, he led a team to commence on-the-spot assessment of the situation in the state with visits to flashpoints of the crises such as Logo and Guma LGAs in Benue State and Tunga in Nasarawa State.

ii) That thereafter, a stakeholders meeting was convened on Thursday, the 4th day of January, 2018 at Markurdi, Benue state, where he met with the Governor of Benue State, Religious Leaders, Traditional Leaders, Opinion Leaders and Civil Society Organisations.

ii) That the meeting in Benue State was meant to interact with the State Government and other Stakeholders with the view to finding lasting solution to the lingering crisis in the state.

iv) That on the strength of claims by the Benue State Governor at the stakeholders meeting alleging that there exist armed Militia camped in Tunga, in Awe LGA of Nasarawa State awaiting to unleash Mayhem on Benue people, he further visited Nasarawa State for facts finding and engagement with stakeholders there, where he found that those claims were untrue.

vi) That having visited the flash points of the crisis and assessed the magnitude of the problem, the Police immediately intensified deployments of personnel, including ten (10) PMF Units, a Unit of Police Special Force, Counter Terrorism Unit, Explosive Ordinance Department to Benue State and Five (5) additional PMF Units to Nasarawa State, while Aerial Surveillance has been intensified around the two States.

viii) That while the Police is doing all that it could to restore normalcy in the State, it is important for the State Government and relevant Stakeholders to engage in continuous dialogue for peaceful coexistence.

In its observation and findings the committee said:

That there is a wide gap and serious defect in the intelligence gathering mechanism of the Nigeria Police and its subsequent counter operations due to inadequate funding.

That Local Government councils have been rendered ineffective thereby unable to deal with security issues before they snowball to crisis.

That inflammatory statements, utterances and actions of some politicians and opinion molders have been found to be promoting hatred and inciting violence.

That there is massive proliferation of arms and ammunition in Benue State and across the country in general.

2) The Police is grossly underfunded, therefore it is recommended that a percentage of excess crude oil fund of about 2 dollars should be made available through appropriation to the Police in order to beef up its operations.

3) Politicians and opinion leaders should desist from statements capable of inciting violence.

4) Deliberate steps should be taken to disarm all armed militia groups in Benue State and in the country in general.

5) The Inspector-General of Police should speedily prosecute those arrested and intensify efforts to arrest those still at large.

Deputy Senate President, Senator Ike Ekweremadu was the first to fault the report when he said that the committee should have invited the state governor who was mentioned severally by the Inspector General of Police for his comment.

Ekweremadu said, “Let me start by commending Sen. Abu Ibrahim for this report and the effort to bring it back on time. I just have one single observation. I noted that in the statement made by the IGP, he copiously mentioned the governor of Benue in most of the paragraphs but I didn’t see where the committee made an effort to speak with the governor. Because if in the circumstance, they did not interview the governor, and his name has been mentioned in respect to certain statements and actions, it would only be fair to him, to be invited by the committee and hear his own side of the story so that we have a balanced view of what transpired.”

Also Senator George Akume (Benue North West) also faulted the report and descended heavily on the Inspector General of Police for “misleading Nigerians on what happened in Benue State.”

Akume said, “I have gone through this summary, what I want to say is that this report would have been more rounded if the governor who has been so massively accused by the IGP was also invited to make input into it. The committee would have had opportunity to interact with him. I am informed that the mandate of the committee was restricted to the office and person of the IGP. And the IGP said he moved immediately to Benue state.

“He didn’t move to Benue state on his own. Following out cries from the senate, the president directed him to relocate to Benue state for one week. He went to the state and stayed there for one day. He spent two days in Nasarawa and he left. His comment has always been very jaundiced. They are not based on professional soundness and they do not show any detachment and impartiality. As far as this issue is concerned. I want to draw your attention to page 3 subsections 4 that based on claims by the Benue state alleging that there exist armed militia camps in Tunga in Awe local government of Nasarawa state, waiting to unleash mayhem on Benue people. He further visited Nasarawa state, fact finding and engagement with stakeholders there.

“Those claims are untrue. What he is saying is not true. Every security agency has made comments on this. Huge numbers are there, and many of them are from outside the country and they are armed with assorted weaponry system. It is unfair to this country for IG to make this comment on what the governor said which is untrue. What he is saying is untrue. What the governor said is true and it is from there that they moved and we have seen video clips of them moving to Benue and very well armed.

“He said in Benue State, that there are livestock guards and this has been the issue that have been repeatedly made by media but we have thousands who are moving with AK-47 freely and they have not been arrested. As we speak, people are being killed in Benue, Nasarawa, Zamara and Taraba States. It is not that we a talking anything out of the ordinary. We are simply saying that there are armed people who are going round killing our people. For me, it has nothing to do with religion. It has everything to do with mischief and economic deterministic. The IG has not been fair to the Nigerian people whom he has sworn to an oath to serve.”

The submission of the Inspector General of Police to the committee obtained by our reporter said: “On the strength of the various claims at the stakeholders’ meeting, I (IGP) visited Nasarawa State for facts finding/stakeholders engagement.

“However, the meeting at Nasarawa was a complete opposite of what happened at Makurdi. Stakeholders from Nasarawa in a revised narrative of the incidence in Benue State attributed the clashes to the untimely, unnecessary, unfriendly Anti-Grazing Law enacted by the Benue State Government.

“The stakeholders in Nasarawa State submitted that since the law was a prohibition of open grazing and establishment of ranches, the implementation of the law to ban open grazing in isolation of recommended provision of ranches as proposed by the law itself, was simply provocative and insensitive as such, a catalyst for conflict.”

The IGP told the committee that Nasarawa stakeholders also debunked the allegation of existence of militia group any part of Tunga community in the state and cited the Anti-Grazing Law of the Benue State Government as the remote and immediate cause of the conflict.

The Inspector General of Police added: “In view of the foregoing, there is indeed no doubt that the implementation of the Anti-Open Grazing Law by the Benue State Government as expressed by stakeholders in Nasarawa State and Ayim in Benue State, is the root cause of the crisis.

“This is exacerbated by the recruitment and arming of untrained Civilian JTF/ Livestock Guards with prohibited firearms whose composition is lopsided and comprising majorly persons of Tiv Ethnic Nationality.

“Also worthy of mention, is the public display of corpses, coupled with unguarded and inciting speeches by the Benue State Governor before and during the mass burial of the victims of the crisis.

According to the police boss, “The establishment of a vigilante group of youths composing of only Tiv ethnic tribe at this critical occasion is a recipe for crisis. In addition, arming them with prohibited firearms (AK-47) has aggravated intra tribal and inter communal clashes especially the Shittile Militias of Katsina-Ala and Livestock Guards of Ukum LGAs of the state which resulted to loss of lives and destruction of hundreds of houses and properties.”

Among others, the police boss suggested that Benue State Government should revisit the Anti-Open Grazing and Establishment of Ranches Law with the aim of first providing ranches with the aim of a gradual implementation.

Re-establishment or bringing out of known cattle routes that hitherto used to exist.

Disbandment and disarming of the Livestock Guards, Shittile Tiv Militias and any other militias groups in order to forestall prohibited firearms in hands of unauthorised individuals


This post first appeared on Chrisblend, please read the originial post: here
People also like
MICHELLE MONE IS A THIEF
High Paying Jobs ($100,000+ /yr) Without A Degree
Understand You
DAVIDO: 3 YEARS OLD BOY IFEANYI, IS DEAD
The Police’s “Every Breath You Take” Music Video Surpasses 1 Billion YouTube Streams
After Escaping the Taliban, This Afghan Couple Is Reunited in Las Vegas
Crosswords with Friends October 7 2022 Answers
The Russia-Ukraine Conflict’s Impact on Europe’s Economy and Living Costs, and the US role