Film review: The Killing of a Sacred Deer **** 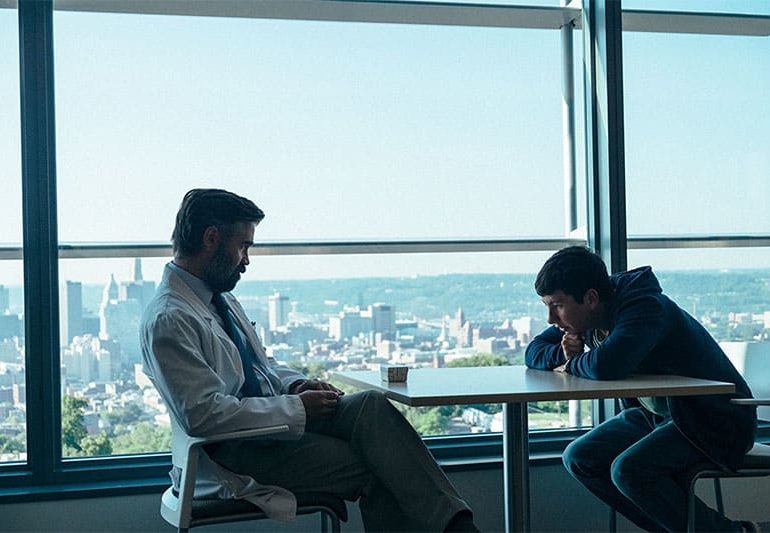 Martin says his favourite movie is Groundhog Day. It was also his father’s favourite, adds 16-year-old Martin (Barry Keoghan) pointedly, and Steven (Colin Farrell) looks stricken – because Steven was the surgeon who may have botched the operation that killed Martin’s dad. Martin guilt-trips Steven into watching Groundhog Day with him and his mother, and we watch a bit of it too, a scene in a diner. “How do you know I’m not a god?” Bill Murray is saying to Andie MacDowell.

That’s actually a key line in The Killing of a Sacred Deer, though I shouldn’t spoil why. Martin, after all, is not a god, he’s an awkward adolescent, droning on about his mum’s lemonade or why he dislikes walking dogs, then shuffling off with a rudely abrupt “Goodbye”. When he smokes – which he shouldn’t really, but you know how boys are – he takes quick, furtive puffs, cupping the cig with his hand. Then again, the title of the film is a reference to King Agamemnon, who accidentally killed a sacred deer belonging to the goddess Artemis and was forced to seek expiation – and the uncanny, the irrational (and why not, the divine), plays a central role in this latest provocation by director Yorgos Lanthimos, the whole film being imbued with a sense of dark magic.

Lanthimos’ style is key here, using some extremely wide-angle lenses and consistently ornate compositions. The cavernous shots of open spaces, especially corridors, coupled with classical-music cues by the likes of Bach and Ligeti recall Kubrick, above all The Shining – and the underlying purpose is similar here, to suggest the unseen. The camera is forever tracking in or out, towards or away from a subject, as if calling our attention to something – but it doesn’t seem like there’s anything to see (or is there?), just Steven and his wife Anne (Nicole Kidman) and their children Kim and Bob living everyday lives. They talk about dresses and watches. They have sex, of sorts (foreplay includes a game called ‘General Anaesthetic’ which involves Anna lying on the bed as if unconscious; the couple are both doctors). Anna likes Bob’s hair long – Steven keeps asking him to cut it – though Kim also has lovely hair. “We all have lovely hair,” Anna says brightly, looking around at her family.

In a way, these immaculate middle-class lives are already weird, even before the weird things that happen to them. Sacred Deer isn’t exactly satire – yet there is one important difference between Lanthimos and Kubrick, viz. that the latter was largely humourless (Dr. Strangelove notwithstanding) whereas his Greek disciple deals in a kind of chilly, sadistic comedy. This, after all, is a film where a character takes a bite out of his own arm (!) then calmly explains: “Do you understand? It’s metaphorical”. (Memo to critics honing their subtle allegorical readings: don’t bother, the film will do it for you.) This is a film where a crippled child announces “I’m going over to the window”, starts to get out of bed and immediately tumbles to the floor in a moment of cruelly funny slapstick. Above all – as in The Lobster, the previous collaboration between Lanthimos and Farrell – it’s a film about a passive, hapless man trapped by arbitrary authority. The unseen isn’t evil so much as implacable; it speaks an irrational, pre-modern language which can’t be reasoned with, only submitted to.

Tension builds steadily but mysteriously, the irrational – a nameless dread – tugging at the edges of the frame. Keoghan is creepily effective, his Martin alternating between annoying kid and something more sinister (he gets a great, cleverly-lit moment when he rings the family’s doorbell then steps to the side, waiting for the door to open, and seems to disappear in the shadows). Farrell underplays, hiding his movie-star charisma behind a bushy beard (just as he hid it behind a pudgy ‘dad bod’ in The Lobster) – and Steven too is constantly hiding, from the guilty memory of the botched operation then, once the chips are down, from the awful choice he’s called on to make. Lanthimos’ anarchic worldview in all his films (others include Alps and Dogtooth) is that authority is always tyrannical, even or especially when it claims it’s being just. Ordinary people get ensnared by it, try to keep their heads down, then finally lash out – the finale here implying that the only way to fight irrational magic is with more irrational magic.

Fishing for meanings is fun – but it’s not the point. The point is that Killing of a Sacred Deer is a viscerally gripping psychological thriller that gets under your skin, each elaborate, beautifully-composed shot – paired with unearthly, ominous music – adding to the sense of unease. Every year there seems to be a movie (last year’s was The Neon Demon) that may not have a lot to say, and may actually be rather silly, or tasteless – yet is so hypnotically stylish that it works nonetheless. This is such a movie, making it appropriate that it’s also the first film (Last Jedi doesn’t count) to play at the Pantheon, the Nicosia screen that’s now re-opened as our one and only arthouse cinema. I have a – probably utopian – dream of a youngster around Martin’s age happening to watch Sacred Deer on the big screen and having his mind blown by something so bold, so discomfiting, so unlike his usual experience of going to the cinema. It could end up being his favourite movie.

Film review: The Killing of a Sacred Deer ****