Cahill fit and raring to go against Honduras 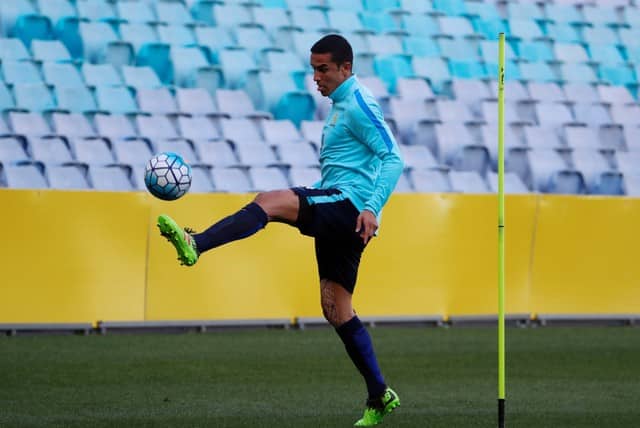 Australia’s Tim Cahill says he is fit to start against Honduras in Wednesday’s decisive World Cup playoff tie in Sydney after being rested in the scoreless first leg due to an ankle injury.

Cahill, who scored a double against Syria last month to put Australia into the intercontinental playoff, was an unused substitute on Friday as the Socceroos wasted several chances to secure a precious away goal in San Pedro Sula.

The 37-year-old said he would look to play a full part in both training sessions before the match at Sydney’s Olympic Stadium and would be ready to go if selected by coach Ange Postecoglou.

“That’s not really my say but I feel great. If I had to play in Honduras, I definitely would have made a contribution,” Cahill, Australia’s most prolific scorer with 50 goals from his 103 appearances, told reporters in Sydney.

“And I think that’s what it’s all about, putting your body on the line and sacrificing (for) these two games, for such a big occasion for our country, being our fourth consecutive chance of getting to another World Cup.”

Australia have spared no expense in their bid qualify for next year’s finals in Russia, bringing their players home as early as possible on a chartered plane kitted out with high-tech recovery equipment.

The Hondurans will have less time to acclimatise after arriving later on a commercial jet.

“Things are going really well, it’s been an awesome process leading into the last game and now going into this one,” said Cahill.

“What we’ve done there is something in sport that gets you the edge.

“It’s about being elite and making sure you take advantage.”

Cahill has been used mostly off the bench through the final phase of qualifying but played a full game in the 2-1 second leg victory over Syria in Sydney last month, scoring both his team’s goals including the winner in extra time.

He was unfazed about the possibility of spending more time on the bench.

“We’ve used pretty much all 20-23 players … That’s always been the boss’s emphasis to use the full squad,” he said.

“The professionalism is always the major factor.

“The big thing is going to be on the day mentally and having composure to finish it off.”

Australia will also have the luxury of more fresh legs with forward Mathew Leckie and midfielder Mark Milligan available after missing the first leg due to suspension.

Striker Tomi Juric was one of the Socceroos guilty of failing to take their chances in the first leg but he said it would be a different story in Sydney.

“Unfortunately we had a few chances, myself included, that we didn’t capitalise on,” said Juric, who rolled a shot wide in the first half when he had only the goalkeeper to beat.

“It was a bit disappointing in that regard, but come this game on Wednesday, we’ll be fully prepared and we’ll take our chances this time.”

Cahill fit and raring to go against Honduras