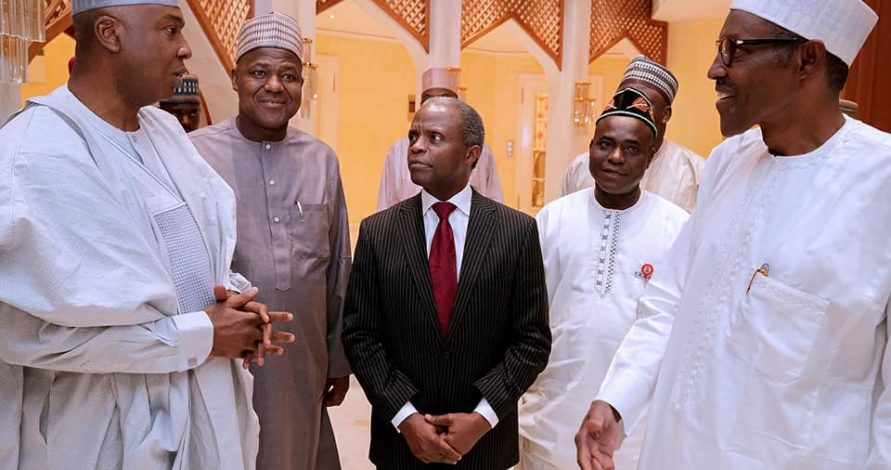 Apparently bowing to pressure from Party supporters , President Muhammadu Buhari has confirmed a possible shake up in the Federal Executive Council with a view to injecting more party supporters in the running of his government.

The President stated this  in his speech to the National Executive Committee meeting of the All Progressives Congress (APC) which he read after journalists were asked to leave the hall by the National Chairman, Chief John Odigie Oyegun.

Chief Oyegun on his part did not make any remark before before asking journalists to leave the meeting hall.

The President lamented the delay in reconstituting boards of federal parastatals despite his promise to do so, pointing out that the delay was as a result of attempt to get the balance right and make sure all parts of the country are represented.

“Let me on a personal note thank you all for your prayers and good wishes, which the Almighty Allah answered in the restoration of my health. I wish to thank you all Party leaders for helping to keep the government running smoothly during my prolonged absence.

“I would like to start by commending our Party Leadership chaired by His Excellency, Chief John Oyegun.  The Chairman and I worked harmoniously during 1984-85 in a previous government.  Happily, circumstances have brought us again to positions of leadership in the country.

“I want to thank Chief Oyegun and his staff for steering the party in the last two and a half years.  Sometimes it is easier to manage failure than to manage success – and a big success such as that we have achieved.

“I must also commend the leadership of the National Assembly led by Senate President His Excellency, Dr. Abubakar Bukola Saraki and Rt. Hon. Speaker Mr. Yakubu Dogara.  I must place on record the cooperation and understanding of the National Assembly including some non-APC members who rose above petty party interests and acted in the national interest.

“My deep thanks also go to our State Governors who faced stiff challenges, especially their determination to maintain unity and tolerance among our communities.  This is in the face of unnecessary politically motivated strife and violence.  Credit should go to APC Governors for extending their hand of fellowship to their colleagues from other parties.

“In my remarks to the Caucus meeting yesterday, I enumerated the progress that our government has made in the implementation of the programs of government and the Party Manifesto.

“We can be proud of our achievements in the last two years, Boko Haram, Niger Delta, Regular Fuel, Improved Power, TSA, Agriculture and Fertilizer, above all, the knowledge that corruption will not be tolerated in this Government. We all know there is CHANGE.

“Nigeria’s prestige has gone up, Nigeria is now credit –worthy, a clear testimony of which was the over-subscription of the Euro-Bond by 4 times. Nevertheless, we are not resting on our achievements.  I am quite aware of the challenges before us.

“Last year, I said we would re-constitute the Boards of Parastatals. I must regret the fact that we have not done so, for many reasons.

“Some of us in this meeting may know I had given instructions since October 2015 for this exercise to start. But there have been inordinate delays through several Committees in an attempt to get the balance right and to make sure all parts of the country are equitably represented.

“By the same token, the compressed Federal Executive Council will be expanded to bring in more supporters at Federal Level, with fresh ideas to be injected into the government.

“Let me thank you all again for the commitment and dedicated service to our Party and to remind you that much more will be required of you in the coming months. I hope we can continue to depend on you. If we keep united and rise above petty or personal quarrels, we will surely achieve the desired CHANGE in the country.”

About 21 governors, members of National Assembly led by Senate President, Bukola Saraki and Speaker, Yakubu Dogara, state chairmen and members of the National Working Committee are attending the meeting which is the third since the party came in power in 2015.

Former Vice President Atiku Abubakar who was expected at the meeting was absent, but sources close to him said he was out of the country.

Before the meeting, a mild drama played out at the entrance to the APC secretariat as the presidential guard on duty insisted that the governors will be dropped at the gate, while they walk into the secretariat.

Security aides attached to Governor Yahaya Bello who was the first to arrive the secretariat for the meeting engaged in a shouting match which almost resulted in a fisticuffs.

Chairman of the Nigeria Governors Forum, Abdulaziz Yari was furious that his colleagues were asked to walk into the secretariat, insisting that they be allowed to be driven in, while the cars are taken out later, but the head of the security team told him that “it will not work that way”.