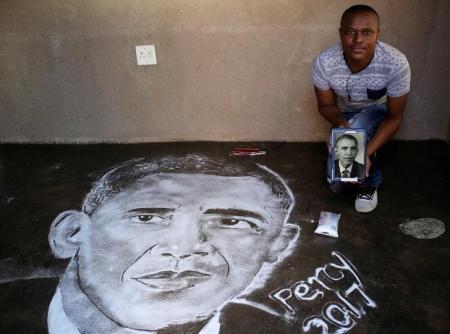 South African artist Percy Maimela stumbled upon his talent by chance, when some Salt crystals spilled on the floor of the shop where he worked and as he tried to collect them he realised they formed shapes that he now turns into portraits.

"You can just take small stones and make something that no one ever thought of," he told Reuters in the capital Pretoria.

"Even salt companies, they wouldn't say salt is just for food anymore," he said, crouching over his portrait of Obama on his dining room floor.

The 31-year-old applies glue to cloth and then sprinkles table salt to sketch the portrait. Some of the famous faces he has drawn include global icon Nelson Mandela. Often, he'll chance his luck with passers by.

"I'll just carry just a black cloth and a bag of salt, then you can just come and give me 300 rand ($23) and then I'll just sketch your face, quick," he said. "And for you it's a memory and you'll never get that anywhere else."

Maimela - who quit his job at a retail store last year to pursue his craft - said he has loved art since he was a child but could never afford professional training.

Getting started on a commissioned piece of work requires a tiny investment of less than 50 US cents for salt and a little extra for glue. He said he can sell a piece for about $30.

Maimela, who also works in pencil, has not been able to get any of his work shown in galleries and relies on the Internet to generate interest in his work.