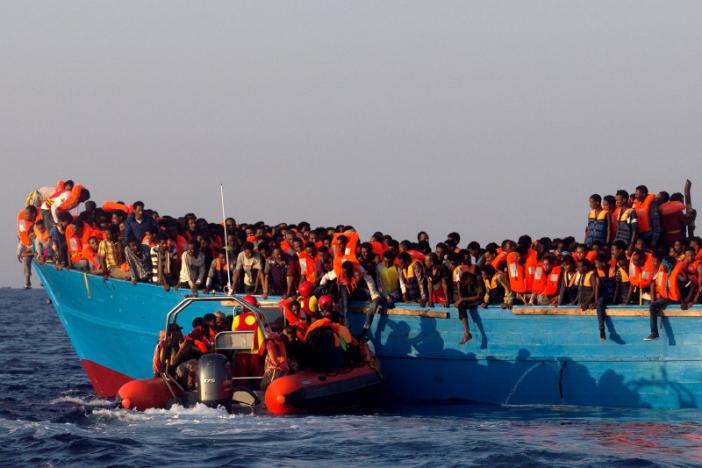 Some 800 Migrants were plucked from flimsy rubber boats on Jan. 12, the Italian Coast Guard said, as Libya-based people smugglers took advantage of a window of good mid-winter weather to send them to sea.

Italian Coast Guard vessel Diciotti and two ships run by humanitarian groups, the Aquarius and the Golfo Azzurro, went to the rescue of a total of six rubber boats in international waters off the coast of Libya, the coast guard said.

Mathilde Auvillain, a spokeswoman for SOS Mediterranee which co-runs the Aquarius, said they aided a small wooden boat carrying 26 people, mostly Nigerians, on Jan. 11, while 123 were taken off a rubber dinghy on Jan. 12.

“We are expecting another long year. There’s no sign that things are going to improve. So far this winter we have had no rest. We have not gone a full week without a rescue.”

Among the 149 rescued by the Aquarius were people from Nigeria, Sudan, Guinea, and Bangladesh, Auvillain said.

With Libya still plagued by disorder and divided by rival governments and militias, it has become a safe haven for people smugglers and a dangerous place for migrants.

“The migrants are fleeing Libya as much as they are coming to Europe,” Auvillain said. Last year the Aquarius crew went to the rescue of 7,500 boat migrants, she said.

Meanwhile, a Hungarian television camerawoman who made headlines in 2015 after tripping and kicking migrants fleeing police was found guilty on Jan. 12 of the misdemeanor of vandalism and was sentenced to probation, AFP reported.

A judge in Szeged, southern Hungary, said the actions of Petra Laszlo breached public peace by triggering “indignation and outrage,” and rejected her defense lawyer’s argument that she was trying to protect herself.
The judge found her guilty, sentenced her to three years’ probation and if she does not re-offend during that period the conviction will be dropped.

In television footage, which sparked global outrage, Laszlo can be seen tripping up a man sprinting with a child in his arms, and kicking another running child near the town of Roszke, close to the border with Serbia.
It later emerged that the camerawoman, who was fired over her actions, had been working for N1TV, an internet-based television station close to Hungary’s far-right Jobbik party.

The Legendary Mechanical Timepiece Si…
West Runton Camping & Caravanning Clu…
طريقة عمل المكرونه بالسجق
Mediterranean Interior Design
Everybody wants me, so when do I self…