Looking through my stash of books on quilting, taking stock of where I'm at....

Tags: quilt book quilts stash flying geese
April 20th 2011
View original
(Lately, I've been feeling a little restless and unfocussed after a prolonged period of working on the same three projects. So as soon as I finished the first phase of one project, I gave myself a week's vacation. I feel the better for it!) 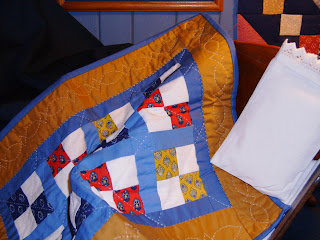 This is the time of year that I feel the need to go through my Stash, my started but laid aside projects, books and patterns, and to weed out items I know I am not likely going to use - I set them aside for the Quilters' Gently Used table at the Quilts at the Harbour Show, which is held on the last weekend in September every year - this year is no exception, so put a ring around Saturday September 24, and Sunday September 25, 2011 and be sure to pop by - we'll be looking for you!  We always have great items for quilters to add to your stash! 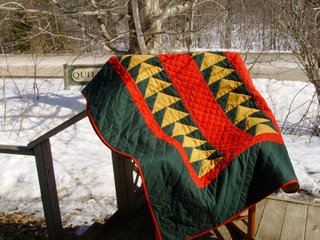 The above two pictures are of several projects I completed over the last year or two - they vary from a small quilt, mattress and pillow with pillowcase  designed to fit the little doll's cradle also in the picture, and directly above an amish-style queen sized strippy Flying Geese quilt which was entirely handpieced and handquilted. I'm lately exploring another way to produce flying geese more quickly but just as accurately as these were done.
******************************** 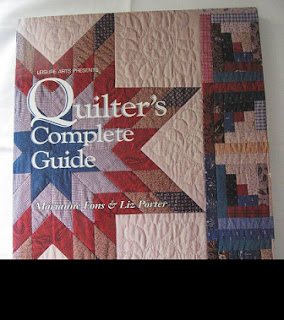 At the moment, I'm completely out of fresh books and magazines to read and since I need to read an hour or two before turning out the light, I've begun going through my library of quilt books and periodicals.  I find this a really stimulating past time. Last night I was going through a Kaffe Fassett book (ISBN 1 - 56 - 158 - 650 - )
and also "Homage to Amanda" (ISBN 1 - 55853 - 268 - 4)
These two books sound as though they might be at opposites in the interest spectrum, but early on in the book, Kaffe states his and his co-author Liza Prior Lucy's strong base in traditional vintage quilts. Stunning quilts and lots of great ideas and inspiration in both those books!
And of course I must remind you all of Fons and Porter's Complete Guide to Quilting - I cut my quilting teeth on this text and keep a copy handy as it has so many handy little boxces of highlighted tips - right now I need to look up the diagonal measurements of squares in order to estimate an on-point quilt's size. 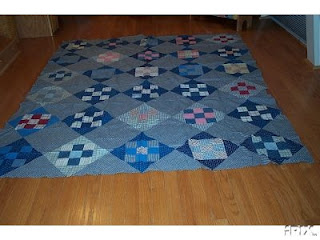 Today, in between tidying up a few almost complete small projects on my work table, I have been going through one plastic tote of stash and finding a place to put some very tempting new pieces of fabric. This has led me to all sorts of new ideas and to poking through my computer files of inspiration pictures.
I have remembered a wonderful almost toile like fabric I liberated from a high end printed cotton skirt I bought at Frenchy's: it is a series of six old engravings rendered on raspberry, rose, and two shades of a dark taupe - the subject is a turn of the 20th century America's Cup race and I see a quilt in the economy quilt pattern as suggested above - I think later I'll get that fabric out and at least cut the interior blocks to be framed by some yet to be found additions from the stash - a nice tie in to my  http://www.acoastalchristmas.blogspot.com/ projects - follow along as I get this new project started.
*****************************************
And below some teasers from my two current major projects: 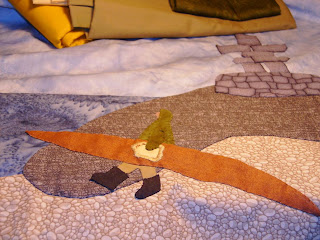 Launching a kayak from the wedding quilt I described some posts back - you'll be seeing more of this later..........
and 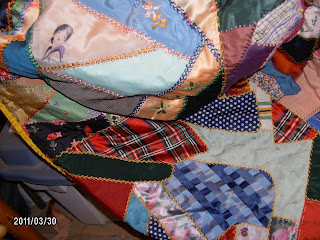 Looking through my stash of books on quilting, taking stock of where I'm at....