A History of Royal Baby Christenings 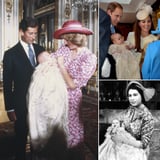 The Duke and Duchess of Cambridge's first child, Prince George, made headlines around the world when he was born in the Summer of 2013, and he was in the spotlight again later that year when he made his first official appearance at his christening, held at St. James's Palace in London. Two years later, Princess Charlotte followed in her little brother's footsteps with a picture-perfect christening of her own. The important event took place in July 2015 at the Church of St. Mary Magdalene on Queen Elizabeth II's Sandringham Estate, where Princess Diana was also baptized.

Being christened is a long-held practice in the Royal Family, as baptism is a sacrament in the Church of England, of which the monarch, currently Queen Elizabeth II, is supreme governor. We're taking a look back at the many princes and princesses of the British royal family who have marked this unique milestone.

A History of Royal Baby Christenings