Iggy Azalea Accuses Nick Young of Cheating on Her: "He Had Brought Other Women Into Our Home" 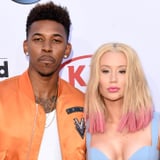 Iggy Azalea and Nick Young's breakup keeps getting messier. The "Team" rapper announced the end of their one-year engagement earlier this month with a heartfelt statement on Instagram, writing that she was unable to rebuild her trust in Nick but still wished him the best. "It's never easy to part ways with the person you planned you're entire future with," she explained. "But futures can be rewritten and as of today mine is a blank page." Sadly, it seems their split wasn't as amicable as it initially seemed. Amid rumors that Nick has gotten his ex-girlfriend Keonna Green pregnant again (the former couple share 4-year-old son Nick Jr.), Iggy posted two tweets that claim she caught him cheating on her after looking at home security footage.

I broke up with Nick because I found out he had brought other women into our home while I was away and caught them on the security footage.

This is just like a second shot to the chest. And I feel like I don't even know who the hell it is I've been loving all this time.

The Lakers player has yet to respond to Iggy's most recent allegations, and the only statement he's made about their breakup so far was when he tweeted "Single" following the news. Here's hoping they can find a way to keep things civil.

Iggy Azalea Accuses Nick Young of Cheating on Her: "He Had Brought Other Women Into Our Home"