179. The late French director Maurice Pialat’s “La Gueule Ouverte” (The Mouth Agape) (1974) based on his own original screenplay: An unforgettable cinematic work on dying and family bonds 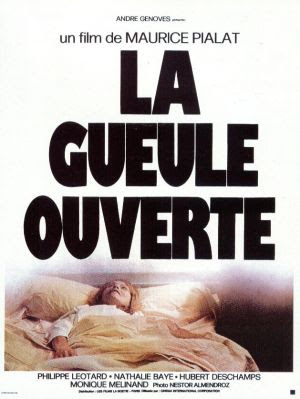 Here’s a Film every true film enthusiast ought to make an effort to see though it is rarely found on the “best film” lists of the better known film critics and directors. Some 40 years ago when this critic saw The Mouth Agape for the first time, the film and its director leapt out not only among the pantheons of French cinema’s giants but also those of world cinema. Forty years later, on a second viewing, this film, The Mouth Agape, still remains for this critic one among his world’s top 100 films. Most importantly, it has one of the finest subtle endings in the history of cinema, one that will be appreciated by any dyed-in-the -wool film viewer. And this review is not revealing it.

P.S. Michael Haneke’sAmour (2012), which recalls the style and content of  The Mouth Agape, was reviewed on this blog earlier. The Mouth Agape is one of the author's best 100 films.

179. The late French director Maurice Pialat’s “La Gueule Ouverte” (The Mouth Agape) (1974) based on his own original screenplay: An unforgettable cinematic work on dying and family bonds