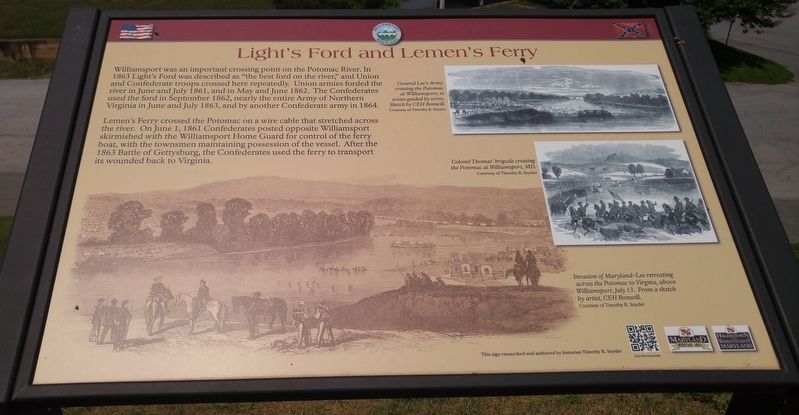 Williamsport was an important crossing point on the Potomac River. In 1863 Light's Ford was described as "the best ford on the river," and Union and Confederate troops crossed here repeatedly. Union armies forded the river in June and July 1861, and in May and June 1862. The Confederates used the ford in September 1862, nearly the entire Army of Northern Virginia in June and July 1863, and by another Confederate army in 1864.

Lemen's Ferry crossed the Potomac on a wire cable that stretched across the river. On June 1, 1861 Confederates posted opposite Williamsport skirmished with the Williamsport Home Guard for control of the ferry boat, with the townsmen maintaining possession of the vessel. After the 1863 Battle of Gettysburg, the Confederates used the ferry to transport its wounded back to Virginia.

[text with lower left photo] Invasion of Maryland-Lee retreating across the Potomac to Virginia, above Williamsport, July 13. From a sketch by artist, CEH Bonwill.