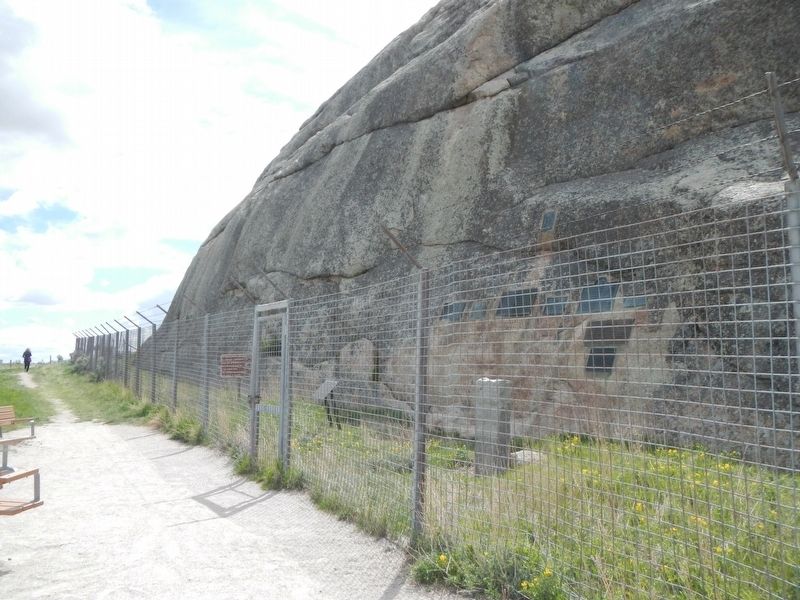 Probably discovered by returning Astorians, 1812. Given its name by emigrants who celebrated Independence Day here July 4, 1825. Capt. Bonneville passed here with first wagons 1832. Whitman and Spalding, missionaries with their wives stopped here 1836. Father DeSmet saw it and owing to many names upon it called it "Register of the Desert" 1840. Gen. John C. Fremont camped here with U.S. Army Aug. 2, 1842. It is the most famous landmark on the
Old Oregon Trail.

(inscribed below the marker)
This tablet presented and placed by Henry D. Schoonmaker, 1920

(This marker mounted at the north end of Independence Rock as is surrounded by memorial plaques honoring pioneers who traveled the Oregon, California, Mormon Pioneer Trails. They are present below; top to bottom and left to right:)

In memory of
Father P. J. DeSmet S.J.
1840
who named this rock
"The Register of the Desert."
Dedicated July 4, 1930
by Wyoming Knights of Columbus.

In honor of
The "Mormon" Pioneers
who passed Independence Rock
June 21, 1847
Under the leadership of
Brigham Young
on their way to the Valley of the
Great Salt Lake
and of more than 80,000 'Mormon' emigrants who followed by ox teams, hand carts and other means of travel, seeking religious liberty and economic independence.
Erected June 21, 1931, by descendants and followers of the pioneers who have made the desert bloom as the rose.

In memory of Jason Lee
the Trail Blazer of Methodism
in the Northwest.
1834-1844

In Memory of
Anderson Deckard
and Party
Who camped here
July 4, 1853
Settled near Albany, Oregon
Erected by his descendants
1954