Talk a walk on the wild side: Wilde life

I find that reading webcomics is a typically a daily one page ritual that displaces the ongoing causal sense of narrative that a standard graphic novel can give the reader. One effect of this is when I do read a webcomic that has a discernible structure behind it with a decent tranche of content I tend to dive in and read continuously until the end.

I'd say that while a strip like Wilde life works quite well in concrete chapters, it also has the feel of the leisurely pace of a slice-of-life comic. There's a facility here that utilizes a slow build-up and that use of gentle quietness that won me over.

Podunk' Oklahoma is 'a real ghost town' as gangly writer Oscar Wilde discovers as he delves into an episodic series of interactions. Each chapter shows everyman Wilde exploring his new home, as he does so he increasingly comes into contact with a place that is imbued with the supernatural. At this stage it feels that the story is building up towards a more concrete explanation behind the strangeness present here.

The spirituality on display here has an animistic tinge. The concept of werewolves is given the inflection of native American 'animal people' as part of a general indigenous background. This isn't rank horror but more of a natural process of understanding the earth, which is quite atypical for genre fiction. It's a softer approach that's more natural than gory. Dee Brown's Folktales of the native American would be a good companion piece to this strip.

What another creator would make overly twee and meandering Pascalle Lepas is able to hedge the mundane into a quiet but assured work. Likewise the artwork on show here is self-assured and flexible. It emphasizes a bright stylized haziness over clear-cut precision and has increasingly been willing to add glistening night time vistas. There is clearly a long-term game plan for this strip and that confidence makes for an enjoyable low-key read. 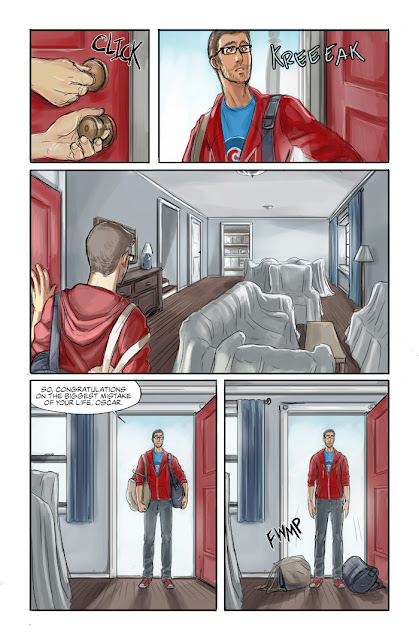 Talk a walk on the wild side: Wilde life