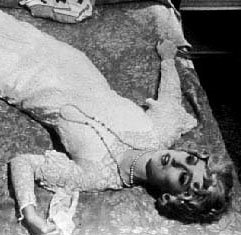 The thrill of the masochistic identification with a Hitchcock heroine. I cannot get enough of them, ever. My all-time favourite would have to be Tippie Hedron in The Birds, in her fantastic coiffure and suit. As Marnie, psychologically scarred and hanging on the arm of Sean Connery, she is equally stunning. The screams, the femininity, the swooning and the clothes: a dark world of visceral pleasures.

The picture above has the same essence as a Hitchcock heroine. The picture, if you haven't seen it before is one from Cindy Sherman's Film Stills. I discovered Sherman's work when I was at university, and fell in love with the darkness and the cinematic quality. I would sit and 'become' the woman in the picture, forgetting that the images were actually self-portraits of the artist. I used a lot of her images in research on gender constructs and viewing patterns. 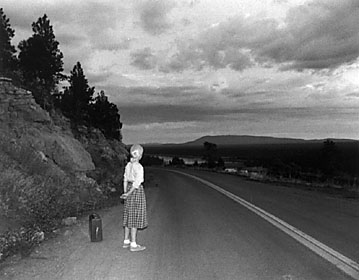 I am fascinated by cinematic spaces and can't help but want to enter them. I would love to climb into a Hitchcock film, sit across from a noir heroine, spend a day in a Lynchian landscape. My daydreaming today was sparked by browsing through Sherman's book. It's a subconscious reality, we could inhabit.

Other artists had drawn upon popular culture, but Sherman's strategy was new.Her film stills look and function just like the real ones - those 8-by-10-inch glossies designed to lure us into a drama we find all the more compelling because we know it is not real.

In the Untitled Film Stills, the sixty-nine solitary heroines map a particular constellation of fictional femininity that took hold in postwar America - the period of Sherman's youth, and the ground-zero of our contemporary mythology. In finding a form for her own sensibility, Sherman touched a sensitive nerve in the culture at large.

Although most of the characters are invented, we sense right away that we already know them. That twinge of instant recognition is what makes the series tick, and it arises from Cindy Sherman's uncanny poise. There is no wink at the viewer, no open irony, no camp. As Warhol said, "She's good enough to be a real actress".

Subscribe to Satin,tat And The Art Of The True Indie Moment