US Air Base Locked Down Due To A Mistake 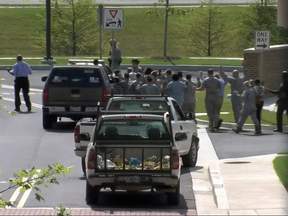 Andrews Air Base - the home of Presidential Jet Air Force One - goes into alert after security staff were mistaken for "shooters".

A key US air base was put on lockdown after a member of a security forces team supposed to be carrying out a drill was mistaken for an "active shooter".
Joint Base Andrews in Maryland - which is home to the Presidential plane Air Force One - was put on alert and released several tweets telling staff to take shelter.

During the lockdown, Homeland Security Secretary Jeh Johnson said during a news conference there was an "unfolding situation" at the base.

But, sometime after posting a partial "All clear", it revealed the lockdown had been caused by confusion during an exercise practising for an attack.

US Air Base Locked Down Due To A Mistake