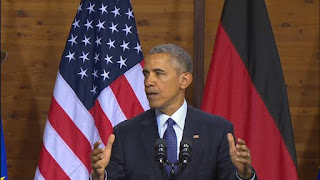 The US President urges Europe to start planning for Brexit and to ensure the UK's departure is orderly and transparent.

Barack Obama has warned European leaders to "catch their breath" and make plans for the UK's exit from the EU.
Speaking during a visit to Canada, the US President said he expected the global economy to stay steady in the short term after Brexit - but he warned there could be trouble later.

Mr Obama said the priority for Britain and Europe should be to work on a clear plan to reassure nervous populations and businesses that deal with the EU.

He said: "My main message to David Cameron, Angela Merkel and others is everybody should catch their breath, come up with a plan and a process that is orderly, that's transparent, that people understand.

"Obviously leadership issues in Great Britain will need to be resolved for it to move as crisply and as effectively as it needs to."

Acknowledging the turbulent week for markets and currencies since the historic referendum, Mr Obama said preparations by central banks, finance ministers and the US treasury secretary had kept the financial system on an even keel.

But he added: "I think there are some genuine longer term concerns about global growth if in fact Brexit goes through and that freezes the possibilities of investment in Great Britain or in Europe as a whole.

"At a time when global growth rates were weak already, this doesn't help."

The President backed Mr Cameron's Remain campaign when he visited the UK in April.

He warned that Britain would be "in the back of the queue" for a new trade deal if it left the 28-member bloc.

But since the referendum result Mr Obama has moved to reassure Britons about the future.

He said: "While the UK's relationship with the EU will change, one thing that will not change is special relationship that exists between our two nations.

"That will endure. The EU will remain one of our indispensable partners."