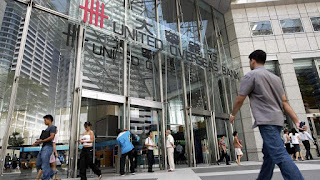 Uncertainty over the EU exit vote is blamed for the bank's decision to temporarily halt customer loans for London home purchases.

A bank in Singapore has become the first in the world to suspend loans for the purchase of homes in London, citing uncertainty over the UK's vote to leave the EU.
United Overseas Bank (UOB) said: "We will temporarily stop receiving foreign property loan applications for London properties.

"As the aftermath of the UK referendum is still unfolding and given the uncertainties, we need to ensure our customers are cautious with their London property investments".

It added that it would keep the suspension under review.

The announcement reflects not just the meltdown on financial markets in the wake of last week's vote - but also wider concerns for the health of the global economy, with Asia firmly in focus.

The Singaporean dollar has gained 10% against the pound since the referendum result.

It means the value of assets held in Britain have been eroded in value.

While Singapore's third-largest lender is the only major financial institution to place its London home loan programme on hold, others have expressed concern about exposure to the UK's prime property market.

While there is no data released by Singapore banks for UK home purchases, UOB is not believed to have been a major player in that particular field and cash buyers are understood to dominate.
But its decision reflects the current political turmoil in London - and predictions of a possible recession and uncertainty about where property prices will go.

Nationwide said on Wednesday that it believed the housing market would be linked to the UK's economic fortunes in the coming months, with employment and wage levels helping determine price movements.

However, it joined housebuilder Redrow in suggesting that the shortage of new homes would help prop up housing costs.

Analysts have warned that the Brexit vote could slow the sale of UK properties in Asia as buyers turn cautious.


Alice Tan, head of consultancy and research at Knight Frank Singapore, said: "There have been London properties available for the last few months before the Brexit.


"The question is whether these properties can still continue to receive buyers in the short-term."