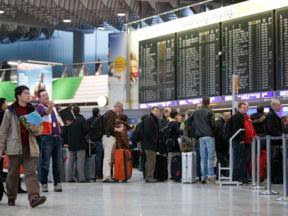 Security scare at one of Europe's busiest airports is causing travel disruption across the continent.
Parts of Frankfurt airport's Terminal 1 were evacuated after a passenger entered the airside area without fully completing a security check, the hub's operator said.


"The federal police therefore cleared Piers A and A+ and passengers will undergo the security check again," Fraport told Reuters.

German police said it was unclear whether the person who entered the secure area did so intentionally and whether they were carrying any forbidden items.


A spokeswoman for Fraport said the breach would lead to flight delays at the airport, German airline Lufthansa's main base.


Frankfurt airport said on Twitter that it would resume operations at 11.30am (BST), while European air traffic controller Eurocontrol said there would be no arrivals before 1pm.