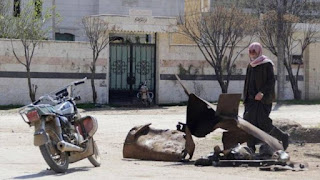 Russia has said it does not accept the findings of a UN-led investigation that concluded Syria's government had used Chemical Weapons against civilians.
A report said last week that chlorine had been used by President Bashar al-Assad's forces on two occasions.


But Russia, a close ally of Mr Assad, told the UN Security Council a number of questions still had to be clarified.


The UK and France, which back the rebellion against the president, called for sanctions to be imposed on Syria.


A September 2013 resolution states that the Security Council will impose measures under Chapter 7 of the UN Charter, which permits military action, in the event of "any use of chemical weapons by anyone" in Syria.
The resolution, which endorsed the destruction of Syria's declared stockpile of chemical weapons, was adopted a month after hundreds of people were killed when shells filled with the nerve agent sarin were fired at rebel-held suburbs of Damascus.


Western powers said only government forces could have carried out the attack, but Mr Assad and Russia blamed rebels.


The international team of inspectors looked into nine cases in seven towns and determined that the Syrian air force was behind two attacks involving chlorine - in Talmanes on 21 April 2014 and Sarmin on 16 March 2015 - and that jihadist militants from Islamic State (IS) carried out one attack involving sulphur mustard.