I felt like running away after I took over power – Buhari 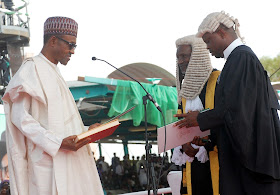 President Muhammadu Buhari on Thursday admitted that after he was inaugurated as the President in May 2015, he felt like absconding after taking a closer look at the state of the country.
While addressing 68 participants of Senior Executive Course 38 of the National Institute for Policy and Strategic Studies, Kuru at the Presidential Villa, Abuja,the President said
He said,

“For 16 years and eight consecutive governments of the other party, you know that there was unprecedented revenue realised. Oil production which can be verified was 2.1 million barrels per day.
“Between 1999 and 2015, the average cost of each Nigerian barrel of oil was $100 per barrel. When we came it fell to less $30 per barrel and is now hovering between $40 and $50.
“Actually, I felt like absconding because 27 out of 36 states in Nigeria cannot pay salaries and we know they have no other source than to depend on salaries to pay rent and do other things.
“I asked if there was any savings and I was told there was no savings. I asked what they did on agriculture, power, rails and roads. There was nothing.
“You know more than I do because you move around. I have not been moving around since after elections but you do. How many of the Trunk A roads are still good enough? How much power do we have although there are some elements of sabotage?“I was told the money was used to import food and fuel. I didn’t believe the answer and I still do not believe it.

I felt like running away after I took over power – Buhari