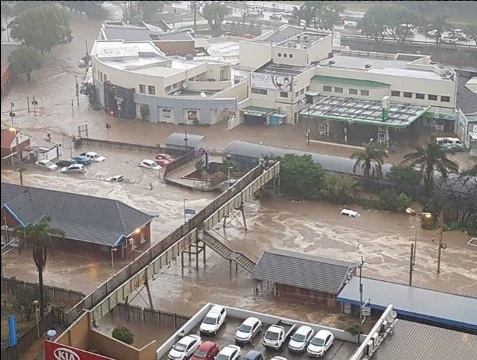 Four people have died as a result of heavy rain and flooding in KwaZulu-Natal, the province’s co-operative governance and traditional affairs department said on Tuesday.
The fatalities were a pensioner in the Ugu district, two people who were electrocuted in Durban, and a Chatsworth woman whose car was washed away, Cogta MEC Nomusa Dube-Ncube said.
Their names would be withheld until their families had been informed.
Cost of damages
Dube-Ncube said it was too early to estimate the damage caused.
She said municipalities would not resort to using section 36 of supply chain management regulations. It allows contracts to be awarded without going out to tender.
Repairs and any form of help would be procured through Cogta, disaster management centres, and the Disaster Management Act.
Heavy rain fell over KwaZulu-Natal since Sunday, mostly affecting Durban. Police and emergency services attended to a slew of incidents overnight, including accidents, landslides, and severe flooding in the city’s informal settlements.
A concrete wall collapsed on a shack in Umlazi. The search for an elderly man thought to be inside was continuing.
In Chesterville, a man and woman were missing after a landslide caused several shacks to collapse.
For emergencies and flooding in Durban, residents should call the Disaster Management Centre on 031 361 0000.
Source: News24

This is Bad KZN Manzimtoti Durban

This post first appeared on The Edge Search, please read the originial post: here
People also like
Blackjack Strategy: Tips and Tricks to Learn when Practicing Blackjack
Best Things to Do in Cadaques, Beautiful Town in Costa Brava
Résumé Red Flags: Post-Pandemic
How To Make Dandelion Jelly
Bague de conversion 2B 67/58mm
Smart Tips on How to Get More Likes on Your Instagram Posts