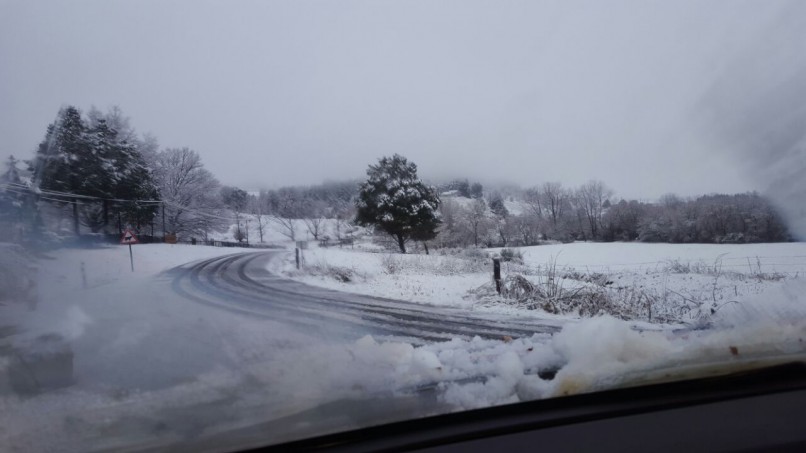 Motorists are urged to drive carefully on Road affected by Snow and sleet in Kwa-Zulu Natal. Photo: Ladysmith Gazette

People are urged to not go sightseeing, as areas where snow has fallen are not road-user friendly.

Oliviershoek Pass on the R74, between Bergville and Harrismith, in KwaZulu-Natal (KZN) is currently Closed after Sunday night’s blizzard-like conditions, reports the Ladysmith Gazette.
The road has been closed at Langkloof from the Harrismith side, and just past Bergville, approaching Oliviershoek Pass.
There is currently no snow falling at Van Reenen’s Pass, and the N3 is open.
People are urged not to go sightseeing, as the areas where snow has fallen are not road-user friendly.

Meanwhile, on Sunday, the Berea Mail reported that KZN Emergency Medical Services were warning motorists to drive safely if travelling on the N3.
Robert McKenzie, EMS media liaison, said weather conditions were poor in the KZN midlands, heading inland. “Currently, there is sleet falling on the N3, and in other areas snow has fallen. People and trucking companies are asked to delay trips if possible,” he said.

According to the most recent South African Weather Services advisory, heavy snowfalls may be expected from Sunday, July 24, through to Tuesday, July 26, as the current cold front extends to parts of KZN and Free State. Heavy snowfalls are expected in Mooi River, Ladysmith, KwaZulu-Natal Midlands, Van Reenen’s Pass, Harrismith, Bethlehem and surrounding areas.

ROAD UPDATE: Monday 8.15 am
Roads to Afriski are CLOSED. We will update you when roads are open and safe to drive. pic.twitter.com/3g9VzVlZqk
— AFRISKI (@SkiAfriski) July 25, 2016

“With the increased possibility of snow, there is also a high likelihood that local residents and travellers may be snowed-in as roads may have to be closed in the interest of safety,” said McKenzie.
He said weather and traffic conditions as well as road closures will be communicated via the media and N3TC’s Twitter feed @N3Route.