Bold and the Beautiful Teasers August 2016 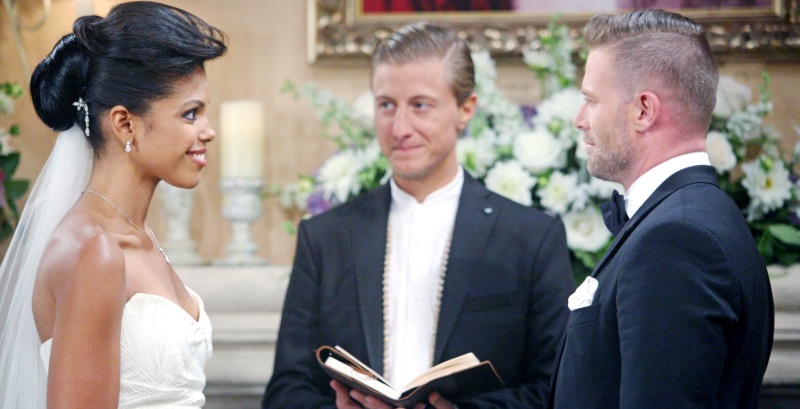 Friday, 19 August 2016
Episode 169 (7132)
Ridge and Quinn work together to match a necklace with a dress. He lets her know that Thomas would like to be a permanent fixture in the Los Angeles office. Later, Quinn finds Deacon and Brooke in the Sky Lounge and is visibly upset that they are spending time together. Deacon reaffirms his love to Quinn. Brooke questions Thomas’ motives for wanting to return to LA full time. Ridge makes Thomas angry when he dismisses his new designs.
Monday, 22 August 2016
Episode 170 (7133)
Thomas and Ridge argue about Thomas’ commitment at work. Ridge tells his son he will get no free rides. Brooke and Caroline discuss Ridge and Thomas. Caroline takes pause when Brooke tells her that Caroline is Ridge’s muse, which gives her more power, and it is a position that Brooke used to have. Brooke speaks to Caroline about how a mother will always worry about her children. Caroline wonders how Ridge and Thomas’ meeting is going. Eric finds Quinn and Deacon deep in PDA at work and tells them that is a big no-no! Later, Eric tells Quinn how impressed he is with her work and she sympathizes with him about his situation with his sons, Rick and Ridge.
Tuesday, 23 August 2016
Episode 171 (7134)
Ridge finds Thomas with Caroline and questions what he’s doing there. Thomas, who is flustered from his fantasy about kissing Caroline, responds that he was just helping her with her ankles. Caroline is proud of Ridge when he apologizes to Thomas. Caroline and Ridge begin to kiss passionately when she receives news from Rick that their divorce is final. This makes Caroline question her life choices and readdress what she wants from the future. Brooke and Zende share in their common bond about what it’s like having left for a while and to return finding so much change. Brooke hints to Zende that perhaps Ridge and Caroline aren’t truly meant for one another.
Wednesday, 24 August 2016
Episode 172 (7135)
Caroline shares with Ridge her desire for having a child. Thomas and Brooke have a heart-to-heart conversation about Thomas’ relationship with his father and his obvious over-protective stance with Caroline. Thomas remains adamant that he only wants Caroline’s happiness when Brooke suggests that he still has feelings for her. Nicole accepts a challenge and models on the Forrester runway when she thinks no one is watching. Once she realizes that Zende is in the room, he joins her on the catwalk and the two share some fun.
Thursday, 25 August 2016
Episode 173 (7136)
Zende notices that Nicole is upset about her father’s behavior at the wedding and their connection grows. Steffy discusses Ivy’s work ethic with Liam and suggests that they should reconsider her employment at Forrester.
Friday, 26 August 2016
Episode 174 (7137)
Nicole joins her sister as Maya begins preparing for her wedding day. Bridget makes a surprise appearance for her brother’s wedding. Rick becomes upset with his Aunt Katie when she arrives with Dollar Bill Spencer. Bill makes an uncharacteristically sincere apology to his once rival. Rick accuses Katie of making Bill say he’s sorry. Ultimately, he tells Bill that he’ll allow Maya to decide if Bill should be able to stay for the wedding. Maya and Bill share a wonderful moment of acceptance and forgiveness. Vivienne tells Julius to keep all negative comments to himself before heading upstairs to help her daughter prepare to be married.
Monday, 29 August 2016
Episode 175 (7138)
Nick prepares everyone for the beginning of Maya and Rick’s wedding. Unaware that Maya can hear them; Vivienne and Julius have a very candid conversation about their daughter. Upset by what she has heard, Maya runs upstairs in tears while her wedding guests wait. Nicole comforts her sister. Vivienne becomes angry with Julius for not confronting Bill about what he wrote about Maya. When the procession begins, Maya takes the high road and allows her father to walk her down the aisle.
Tuesday, 30 August 2016
Episode 176 (7139)
All eyes are on the bride when Maya stops mid-way down the aisle and confronts her father asking him questions that are difficult for him answer. Ultimately, an emotional Maya forces Julius to share with everyone his true feelings about her and Rick. Steffy reveals to Thomas the truth about the night that Aly died when he encourages her to move forward.
Wednesday, 31 August 2016
Episode 177 (7140)
Steffy expresses her concern about Ivy’s behavior since Aly’s death and suggests that Ivy isn’t upset about losing Liam, but about Steffy’s involvement with Aly. The siblings make a pact to keep Steffy’s secret between them. Wyatt attempts to distract Ivy from the painful memories of Aly’s death with a kiss. Rick and Maya’s wedding continues.
Be sure to tune into The Bold and the Beautiful @ 19:00 every Monday to Friday on SABC3

Bold and the Beautiful Teasers August 2016