'I'm not sorry'; He killed his sister for taking photos and 'daring' video 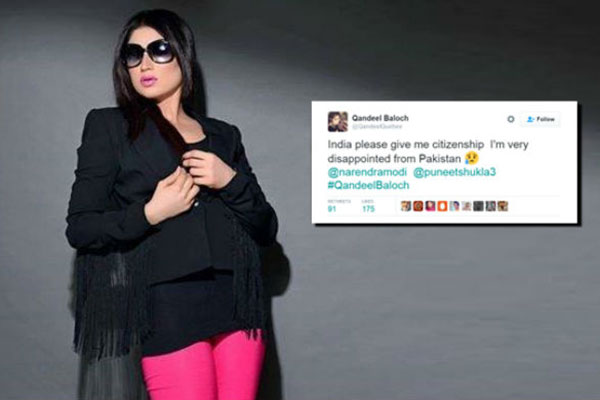 Multan, Pakistán.- 's brother Qandeel Baloch, a popular Pakistani model in social networks but condemned by conservative bodies, said Sunday that regretted not having Killed by his "intolerable behavior."

Have you ever made love in front of o…
The Queens of Pop: In The Mix
جمہوریت ڈرامہ
Creating and Selling Digital Products
It's Time To Rebuild
"Yes, of course, strangled her," said Muhammad Wasim to the media at a press conference organized by the police in the city of Multan in Punjab province.
"I was on the ground floor while our parents slept upstairs. It was 22h45 when I gave him a pill and I killed her, "said Wasim, who said he acted alone.
"Not at all I am sorry for what I did," he said, saying his behavior was "completely intolerable".
Baloch, whose real name was Fauzia Azeem, was killed on Friday night at his home in Multan. His brother was arrested on Saturday after being denounced by his father and Sunday appeared briefly in court which will have to return in hearing Wednesday.
In Pakistan every year thousands of Women die in so-called "honor crimes". In many cases the perpetrators, who are often relatives of the victims, are free because Pakistani law allows the family to forgive the murderers.
The murder has shocked the country and on Saturday held a vigil in Lahore, while a request for justice has already gathered thousands of signatures.
Meanwhile the Dawn, the country's largest English-language newspaper called for the death of the young serve as a "boost" to legislate against such crimes.
Qandeel Baloch, in his 20s, had tens of thousands of Followers on social networks. In the photos and videos that used to appear very well-hung hair and makeup posing provocatively, images that his countrymen considered more conservative outrageous.
Baloch, buried Sunday near his family's house, became famous among other things for having pledged a striptease to the national cricket team or wear a tight scarlet dress Valentine.
A sly 'activist'
one selfi was also known by a mullah, an image strongly condemned by the Ministry of Religious Affairs of the country. After this controversy, Baloch said he received death threats but said the authorities ignored their requests for protection.
While some saw it as an equivalent in Pakistan Kim Kardashian, others believe it was an Activist who consciously fought for the rights of women,
In his last posting on Facebook, on July 4, he said he wanted to change "the typical orthodox mentality of the people" and thanked his followers to "understand the message we try to convey through my messages and Daring videos."
"Qandeel was a very clever person who knew what he was doing was more to be the most beloved of Pakistan bad girl," he told AFP journalist and activist Aisha Sarawari.
His assassination "It is a new setback for women of our generation," he lamented.
Meanwhile Benazir Jatoi, who works for Aurat Foundation, a local oenegé that defends the legal and political rights of women, said that "there are many culprits" of his death.
"He made a face Qandeel many Pakistani women are murdered by a society that has given carte blanche to men," she complained.

This post first appeared on The Edge Search, please read the originial post: here
People also like
Have you ever made love in front of other people?
The Queens of Pop: In The Mix
جمہوریت ڈرامہ
Creating and Selling Digital Products
It's Time To Rebuild
Pineapple juice benefits for skin
GALA DALI – THE MUSE OF THE SURREALISTS
8 Things You Didn’t Know About Video Marketing For E-Commerce
Flannel Pajamas Sets Winter Home Clothes For Women Men Sleepwear Couple

'I'm not sorry'; He killed his sister for taking photos and 'daring' video