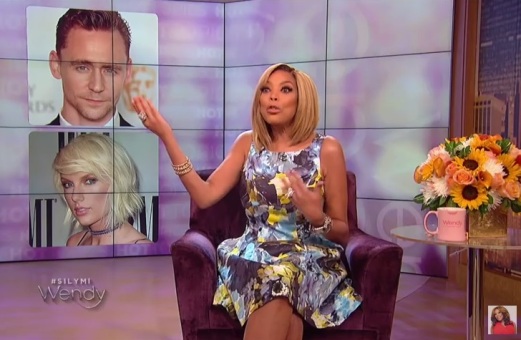 Wendy Williams on her Hot Topics accused singer Taylor Swift and actor Tom Hiddleston of 'setting up' their relationship and wondered why pictures of the pair kissing and showing PDA appeared all over the internet barely a month after breaking up from DJ Calvin Harris.
She also wondered why Taylor and Tom have both met each other's parents so early in their relationship saying Tom wanted to drum up popularity and support as he aims to play  'James Bond'  in the new James Bond movie.
Tom met Taylor’s parents in Tennessee earlier this month, with Taylor flying to England to meet Tom’s parents in Essex last week.
‘It’s only been three weeks! And she’s 26! That’s old enough to understand—like, you don’t show your feelings on your sleeve in three weeks, you know? And he’s a 30-something.’
She accused Taylor of ‘setting up’ those first shots we saw of the pair smooching on a rock near her home in Rhode Island.
‘Now, you might be wondering why the paparazzi is in Rhode Island?’ she asked her audience. ‘And I say, well, no. 1, the Kennedys have been there for years. No. 2, Taylor probably called them.’
‘He wants to be the next James Bond, and he’s English…I’d never heard of this guy before, you see, so how do you drum up votes? By getting on Hot Topics. I’m just saying! How do you get on Hot Topics? By dating somebody that we talk about.’
"This is not good," Williams commented. "First of all, you don't want your parents counting your number, and honey child ... what you don't understand, whether you're a man or a woman -- every time you bring someone home -- your parents are like, 'That's number three.'"
"You only bring a person home that you really think something is going to be popping off with," she advised.
The outspoken host also had some harsh words for Swift's ex, Calvin Harris. Wendy Williams criticized the 32-year-old DJ/producer for apparently responding to fans on Instagram last week, saying Swift "controlled the media" and that he felt "free" after their breakup. The comments have since been deleted, and a source close to Harris told ET he did not write the comments.
"Calvin talking really girly about Taylor on the 'gram," Williams cracked. "Well, you know what, I totally believe that [Harris claiming he felt "free"] but you don't have to say it, Calvin. Go on with your life. You got what you needed from Taylor, which is to be on 'Hot Topics,' and so, Tom's got next."
Watch the video below.