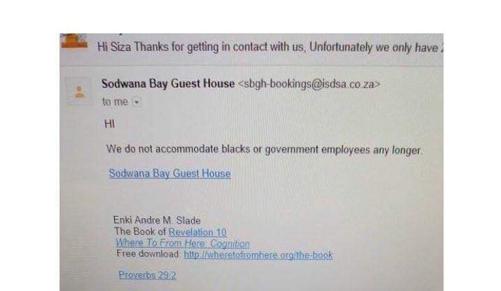 Sodwana Bay Guest House owner Andre Slate will not back down from his religious conviction that God intended blacks and whites to be segregated.
Speaking to Vuma FM radio host, Jacinta Ngobese, under the guise that she was a guest looking for accommodation, Slate insisted the bible says blacks are not supposed to mix with other races.

What to wear: outfit ideas for Christ…
Karen Wiesner: I Have Dreamed a Littl…
high cholesterol foods to avoid - lov…
5 easy ways on how to fix your credit
Novedades ECC Ediciones Noviembre 202…
In the initial email to Sizakele Msimango who was looking for accommodation at his lodge, he said he does not accommodate black people or government employees any longer.
He quoted Proverbs 29:2 which says: “When the righteous are in authority‚ the people rejoice: but when the wicked beareth rule‚ the people mourn.”
Speaking to Ngobese he went on to explain that in the King James Version of his bible, black people are ‘servants’ and servants cannot sit with ‘kings and princes’, he goes on to say he is royal and blacks are animals.
“You classify in the bible as not being human, you’re not homo sapien” he says, “I’m not calling you an animal but you are classified in the animal kingdom.”
DRUM made several calls to Slade’s phone which were directed to an automated voice message that said his mailbox is full. DRUM also called a person named Katie whose number is also listed on the Sodwana Bay Guest House website but calls to that number were not answered.
Both Slade and Gail did not respond to text messages.


This post first appeared on The Edge Search, please read the originial post: here
People also like
What to wear: outfit ideas for Christmas & summer
Karen Wiesner: I Have Dreamed a Little Dream (Authors and Dream Inspiration), Part 2
high cholesterol foods to avoid - lovelcute
5 easy ways on how to fix your credit
Novedades ECC Ediciones Noviembre 2021
Getting It Wrong, Making It Right: A Call to White Helping Professionals
Discover the Magic of Venice in November
Blackjack Strategy: Tips and Tricks to Learn when Practicing Blackjack
Love By Numb3rs Share New Video for “Colours”