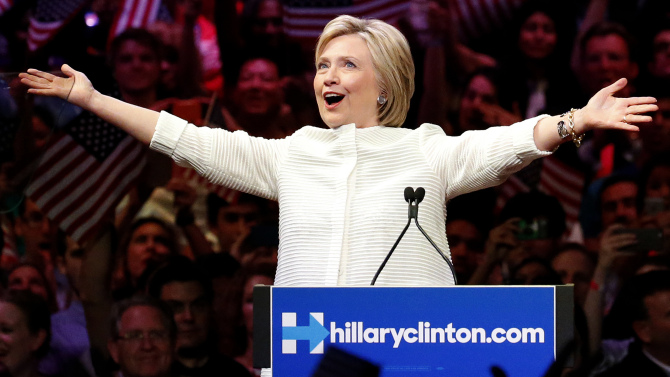 Hillary Clinton marked the moment as the first woman to win a major party nomination on Tuesday, a day after major news outlets said that she had secured enough delegates to defeat Bernie Sanders in the protracted Democratic primary contest.

“Thanks to you, we have reached a milestone, the first time in our nation’s history that a woman will be our party’s nominee,” she said to supporters in Brooklyn, N.Y., about an hour as she was declared theprojected winner of the New Jersey primary, one of six states voting in the final big day of the nomination battle.

Clinton tweeted earlier in the evening, “To every little girl who dreams big: Yes, you can be anything you want — even president. Tonight is for you.” She got a new Twitter avatar that said, “June 7, 2016. History made.”

The date of Clinton’s speech was notable: On June 7, 2008, she conceded her nomination race to Barack Obama.

It may be hard to see tonight, but we are all standing under a glass ceiling right now,” Clinton said, alluding to her speech eight years ago when she referred to falling short of the nomination but not giving up.

She devoted parts of her speech to reaching out to Sanders supporters, saying that she knows what it is like to deal with disappointment after a hard-fought battle. “I know that feeling well,” she said.

She also talked about getting big money out of politics, a central theme of the Sanders campaign and one of his major criticisms of her campaign. She said that Sanders brought “vigorous debate” to the race that has been “very good for the Democratic party and good for America.”

She criticized Donald Trump, the presumptive Republican nominee, as a candidate who would divide the country. “Bridges are better than walls,” she said, a reference to his vow to build a wall between the United States and Mexico to curb illegal immigration.

“To be great, we can’t be small,” she said, in a line sure to be a signature slogan.

She called Trump “temperamentally unfit” to be president, and said, “He wants to win by stoking fear and rubbing salt in wounds and reminding us daily how great he is.”

Trump’s character also played into a comment she made about her late mother. “She taught me to never back down from a bully, which turns out to be great advice.”

“Well, let me put it this way, it has taken me 93 years to see this,” Norman Lear, the legendary producer and longtime progressive activist, told Variety.

When it comes to unifying the party, Lear said that he didn’t “know whether I am optimistic or prayerful. It makes too much sense not to think everyone won’t come together on this.”

He said that Clinton’s biggest challenge “will be dealing with people who don’t admit they are sexist. I don’t know what percentage of the country it is, but it isn’t small.”

As for what is the best way for Clinton to challenge Trump, who Lear has compared to Archie Bunker, “I think she only has to leave him alone. In that sense I think he worker for her.”

On Twitter, Jane Fonda relayed a message she sent to CNN on Monday after the AP called the primary race for Clinton.

“I just got word that Hillary has clinched it and I am way more emotional and thrilled than I ever expected to be,” Fonda wrote. “I’ve known Hillary since the 90s when she wanted to talk to me about the challenges of raising a child as a famous woman. She’s as intimate and personable as can be and she’ll make a real difference on so many levels.”


This post first appeared on The Edge Search, please read the originial post: here
People also like
10 of the best places to visit in Portugal
Banema Studio, Lisbon
What Is the Worst Credit Score?
An Officer and a Spy
Estuary Essex … exploring the grimy but lovely Thames near Tilbury
How to Exchange ETH to BTC Without Going Crazy Over It
“The Friend Who May Not Seem a Friend” – The Cat and the Fire, Post 2 of 3