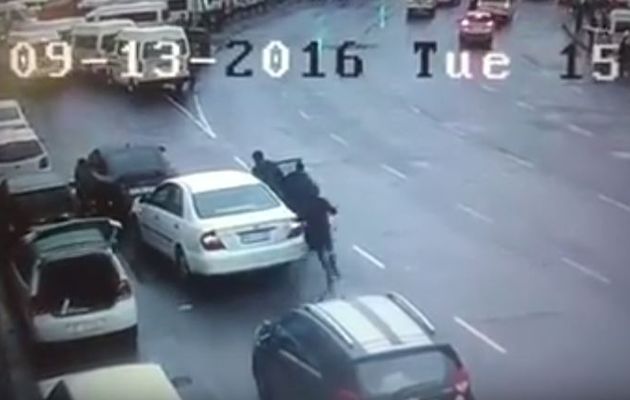 Two Durban men learned a hard lesson when a crowd descended on them to stop an attempted hijacking the pair were allegedly carrying out.

A video of the incident‚ which took place on Pine Street in Durban's central business district on Tuesday afternoon‚ has surfaced on social media platforms and shows the two men approaching a white sedan.

Ks Lash Beauty
how to improve vision in 7 days
GE Versana Premier and GE Logiq P9 – …
The Bank for International Settlement…
Karen Wiesner: I Have Dreamed a Littl…
The two men then engage in a struggle with an elderly man seated in the driver's seat and pull him out of the car.
Within seconds‚ members of the public pounce on the two alleged hijackers‚ assaulting them.
Rivaaj Ramdas shared the video on Facebook with a photograph of one of the assaulted men laying on the street‚ his face covered in blood.
According to Ramdas' post‚ the second man escaped.
Said Ramdas: “I’m so glad that for once the community stood up and fought back as can be seen in the video. One of the animals escaped. ...the other was smashed to a pulp as per the pic (sic). May he die and Rest in Piss (sic)!”
Ramdas told Tmg Digital on Wednesday that he has no further information on the incident.
South African Police Service spokesperson Lieutenant-Colonel Shooz Magudulela said Durban Central Police was not aware of the incident – “No one has reported the matter to the police.”
Meanwhile‚ Ramdas' Facebook post had received more than 4000 shares at the time of publication‚ with many commending the community for taking action against the two alleged hijackers.
Phumlile Chiliza said: “Well done community of Durban. This must be done daily.”
Sadique Khan shared a similar sentiment‚ saying: “Well done my fellow South African citizens‚ crime has no color‚ these idiots thought that they brother will help them‚ you can see no more is no more‚ street justice is by far the best solution to any crime‚ lets unite and fight all time of crime.”
Ashika Kavitha Pillay cheered on a display of girl power when she posted: “Well done to the two ladies that fearlessly ran to assist this uncle!”
Visvin Reddy had a different take‚ however: “Just following this discussion thread with sadness. How unfortunate that we can applaud acts of barbarism because we are left feeling helpless and lawless? And women are forced to place their lives at risk while warding off thugs from attacking innocent people. Cry our beloved country.”
– TMG Digital


This post first appeared on The Edge Search, please read the originial post: here
People also like
Ks Lash Beauty
how to improve vision in 7 days
GE Versana Premier and GE Logiq P9 – A Comparison
The Bank for International Settlements (BIS) has warned that the crypto…
Karen Wiesner: I Have Dreamed a Little Dream (Authors and Dream Inspiration), Part 2
Jordanian Startup Eon Dental Raises $26M in Series B