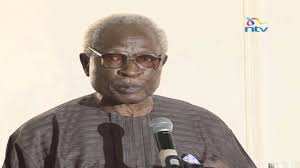 Elechi Amadi who died yesterday 29th June 2016 was a Nigerian author of plays and novels that are generally about African village life, customs, beliefs and religious practices, as they were before contact with the Western world. Amadi is best regarded for his 1966 first novel, The Concubine, which has been called "an outstanding work of pure fiction".

He was born on 12 May, 1934 in Aluu community, Ikwerre local government area. He attended Government college , Umuahia and went to the University college, Ibadan where he bagged a BSc degree in Physics and Mathematics.
He served in the 3rd Marine Commandos of the Nigerian Army. He was first Commissioner for Education in the old Rivers state and also served as Commissioner for Lands and Housing He had several honours to his credit.

He was Fellow of the Nigerian Academy of Education and a Member of the Order of the Federal Republic of Nigeria . He was awarded a honorary doctorate degree by the University of Port Harcourt in 2011. He was abducted by unknown gunmen in 2008 and later released after some days in their custody. He lived in his community, Aluu until his death.