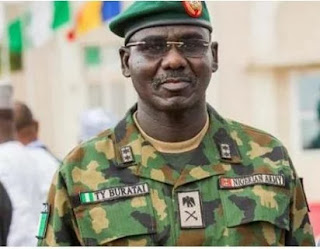 
Chief of Army Staff, Lt-Gen. Tukur Buratai
Buratai said this while assessing the performance of Troops and their Commanders participating in the exercise in the Alkaleri forest.

He said apart from improving the combat readiness of the troops and the testing of high caliber weapons, the exercise would address security threats around the area.

“This area is a very good training ground but during this exercise we will be killing two birds with a stone.

“It is a training exercise and it is also a real operation as we hope to clear any hideout of criminal gangs that are known to be operating in the fringes of the forest.

“This is the starting point for us to be more professional at this particular time,’’ he said.

He said the exercise had brought out the best in the Nigerian Army both in terms of troops combat readiness and in the handling of high caliber weapons.

He said some of the equipment used in the exercise had been abandoned in the workshop for many years.

According to him, some of the equipment were not usable but had been repaired and would be used in real time situation.

He said the exercise was a demonstration of the judicious use of funds allocated to the Army by government.

On his part, the Chief of Defence Staff, Gen. Gabriel Olonisakin, said the exercise was unprecedented stressing that such exercises would return the Army to its days.

Olonisakin said the exercise would prepare troops and their equipment for present and future engagements both in Nigeria and beyond.

“This exercise which is a command exercise is aimed at training troops and their commanders.

“Having seen what we have witnessed here, I know that the commanders out there will do better than what they have been doing.

“I am impressed because for some time we have not had it this way, under this particular exercise, the correct personnel are deployed and the right equipment are used,’’ he said.

Also speaking, the Deputy Governor of Bauchi State, Nuhu Gidado, Commended the Army for choosing the state for the exercise.

He said the exercise would help to address some of the security challenges confronting the state being perpetrated by some criminal elements operating from the Alkaleri forest.

`It is more than a privilege having them conduct this exercise here in Bauchi state, because for a very long time we have had pockets of criminal activities coordinated from this forest.

“This particular exercise has given us hope that our people can now live in peace,’’ Gidado said.

The News Agency of Nigeria (NAN) reports that the exercise featured simulation exercises using tanks and other caliber of weapons as well as real combat operations deep into the forest.

Sobriety In The Time of Quarantine: T…
Who is running this show?
طريقة تنحيف البطن بسرعة
Motivational Tips to Help You Stick …
Why Friday The 13th Will Be Your Luck…