Jealous Ugandan husband poured acid on his wife, claims he found out she was HIV positive 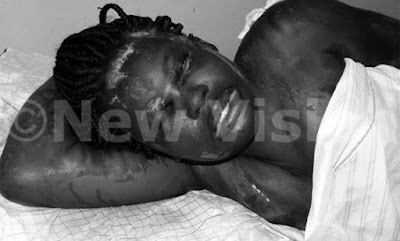 Justine Aisha Kyomugisha died of her injuries  at Mulago hospital late last month, after her husband of eight years, Imran Kaliisa poured acid on her. She left behind a seven-year-old daughter. He has been on the run since then until his arrest recently.

According to The  Kampala Sun, on the night of January 7, 2016, a domestic quarrel descended into horror when 27-year-old  Kaliisa doused his Wife, a Container Village-based second hand shoe trader, with acid.
The couple shared a home in Mankindye, Barracks Zone for eight years. Kyomugisha's relatives say the couple had been having a long standing feud but they remained supportive nonetheless. However, things took a bad turn when Kaliisa started working in Rwanda six years ago and left his wife. 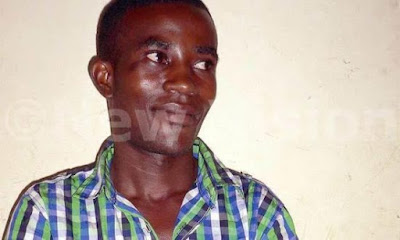 "At times he would return and spend just a day and go back, sometimes leaving her with nothing," they say.
Her family came to her rescue and helped to set up a second hand shoe business in Coontainer Village so she could take care of herself. To Kaliisa, this was the start of the troubles. He tried to dissuade her from working and urged her to hire an attendant.
Meantime a determined Kyomugisha worked hard and grew her business, expanding to Park Yard and St. Balikuddembe market.

Kaliisa reportedly got tipped off by friends that his wife had another man thus his decision to return to Kampala to monitor her. He started working in Kikuubo last December.

Kaliisa put strict conditions for his wife among which was never to return home late. On that fateful day, Kyomugisha returned home late and Kaliisa accused her of having been out with men.

Zamu Nalumansi, a neighbour to the couple, says on the fateful day the couple got into a fight. Kyomugisha fled to her house for refuge, with her terrified daughter in tow. 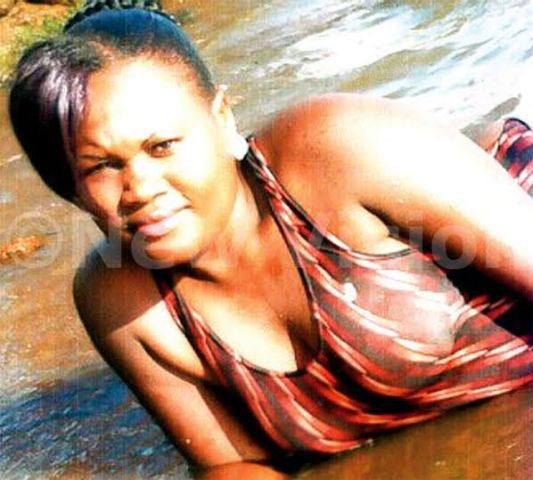 As Kyomugisha narrated to her what had happened Kaliisa came in hot pursuit and asked her if she had chosen to flee to her neighbour instead of her parents. He then ordered her to go back to the house and pack all her things and leave.

Unknown to them Kaliisa, like a crafty hunter, was luring his wife to hell. A few steps out of the neighbour's house, with her little girl in tow, Kaliisa, armed with a cup, sneaked up behind and emptied its contents in her face.

As it turned out he had just burnt his wife with acid, some of which splashed onto the little girl's back.

Nalumansi responded to calls for help as her friend screamed in anguish: "Help me 'Taata Shamim' has burnt me with acid!"

Nalumansi too sustained minor burns as drops of acid splashed off Kyomugisha's face.

Police suspect Kaliisa had for long planned the attack and that the acid had been procured and kept nearby.

The criminal investigations boss Katwe police, Benon Ayebare, said a manhunt  was ongoing for Kaliisa who fled after the attack.

Edna Ayitamya, a sister to Kyomugisha cried out, saying it wouldn't be Kaliisa to carry out such a cowardly act after he abandoned his wife and they looked after her and his daughter.

Kaliisa was arrested days ago from areas of Bunyoro after four months on the run. He confessed to the heinous act. He told the Police at Katwe that he always grilled his wife about the numerous phone calls she received at awkward hours of the night, strongly suspecting they were from lovers. She always told him they were only business colleagues. Bothered by the trend, Kaliisa started rummaging threw her belongings to find ‘evidence’ of infidelity.
It was during one of such ‘fishing expeditions’ that he found an HIV status card showing she was positive. All hell broke loose. Kaliisa says when he confronted his wife she denied having knowledge of what he was alleging. Out of anger he resolved to punish her in a manner she would never forget, and set about his evil plan that he executed on the fateful night.
Source: New Vision/Kampala Sun

Jealous Ugandan husband poured acid on his wife, claims he found out she was HIV positive